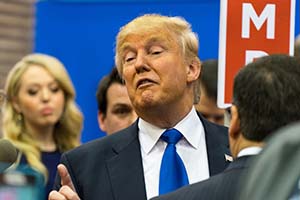 GOP presidential nominee Donald Trump was adamant this morning he never once spoke to Florida Attorney General Pam Bondi about a $25,000 donation his foundation made to her in 2013.

You see, on Sept. 17, 2013, the Donald J. Trump Foundation – a philanthropic charity formed in 1987 by the real estate mogul and his family – donated the money to Bondi's Justice for All group, a political organization backing her re-election for state attorney general in Florida.

The check arrived just four days after Bondi announced she was contemplating whether to investigate Trump University.

Editor's Note: Find out how Money Morning is making investing profitable for retail investors, just like you.

Of course, this was well before Donald Trump announced his bid for presidency on June 16, 2015. The news, however, is coming up now because The Washington Post revealed last Thursday that Trump paid the IRS a $2,500 fine for the contribution…

Why the Contribution to Trump U. Investigator Was Illegal

Specifically, the gift from the Donald J. Trump Foundation violated IRS laws that prohibit donations to politicians by charities. While a charity can donate to lobbying and advocacy causes, it cannot give money to a politician's campaign directly.

The contribution seemingly worked, however.

After the reality star's check arrived at Bondi's office three years ago, her camp confirmed on Oct. 17, 2013, that it had nixed suing Trump. It cited insufficient grounds to proceed.

Now, not only is Bondi not investigating the Trump U. scandal, she's actually rooting for "The Donald's" presidential bid. On March 14, 2016, the Florida attorney general announced her support at a Tampa campaign rally.

Meanwhile, New York Attorney General Eric Schneiderman has taken up the Trump U. case on his own.

Trump Responds from Aboard Trump Force One

Regardless of how the Bondi donation "looks," the real estate magnate insisted to reporters from aboard Trump Force One this morning:

"I never even spoke to [Bondi] about [the donation] at all. She's a fine person. Never spoke to her about it. Never," reported CNN.

Next Up: Clinton will nab at least four swing states because of this one recurring economic factor…