Former Fed Chair "Helicopter" Ben Bernanke once famously said that he "didn't understand gold" and that it wasn't really money. We've seen that this disdain for the yellow stuff is common among the world's central banking class.

The systemically important "Too Big to Fail" banks don't much care for the idea of gold, either, although they certainly don't mind manipulating it when it suits their purposes.

So it's funny then, that central banks and commercial TBTF banks are grabbing undervalued gold and silver miners left and right. They've been doing it for the past five years, perhaps even longer.

No investor can afford to ignore this trend, because the profit potential here in some of the world's most undervalued stocks is staggering...

Central Banks Would Rather You Didn't Know

The Norges Bank, the Norwegian central bank, has filed to have its Q2 2016 U.S. equity holdings be given confidential treatment. That's according to smaulgld.com.

The website reported that the NB filed their SEC form 13F for Q2, but that it includes a blank information table. It appears the "deal" that NB has struck with the SEC is to file an Amended Form 13F a year later, providing the detailed holdings.

This is particularly interesting because the June 30, 2015, filing from last year reveals the central bank held a whopping 23 gold and silver miners.

What's more, if valued at recent share prices, that portfolio was worth nearly $1 billion.

And clearly, they'd rather you not know about it. So they may or may not own those shares still today, but just the fact the NB had the foresight to own that sector during a very weak period speaks volumes about their views on the sector.

Meanwhile, there is another central bank with considerable exposure to the precious metal sector, but they aren't going to the same lengths to keep it hush.

The Price of Gold Is Artificially Low Right Now

The Swiss National Bank (SNB) is another central bank which, to Warren Buffett's dismay, seems to like the shiny yellow stuff, in a particular form at least.

While we're distracted by big "events," like when the SNB dropped the franc's peg to the euro and sent the Swiss currency (and export costs) soaring, it turns out that's just a sideshow.

The real news is what's quietly taking place at the SNB's trading desk.

Despite the SNB cutting its physical gold reserves by more than half between 1999 and 2008, the central bank has been buying precious metals stocks going back to at least 2013. Their mining shares portfolio was worth $500 million at the time.

The bank reported for the period ending June 30 that it held more than 30 gold and silver miners. If you value those holdings at recent prices, the portfolio runs a cool $1 billion.

But it's not just central banks that have a hand in this highly performing sector. Germany's struggling, derivatives-laden Deutsche Bank Ag USA (NYSE ADR: DB) disclosed in its own SEC 13F filing that it holds about $2 billion in gold and silver mining stocks.

By the way, Deutsche Bank analysts recently said that, because of the correlation between central bank monetary expansion and gold prices, gold should be closer to $1,700 right now.

And here's one of the main reasons I think they are so hot over this sector.

These Stocks Are a Rare Source of Value in the Market

As U.S. stock markets have been making new highs, their relative attractiveness has waned.

Fund managers everywhere are scratching their heads in search of real value. Precious metals miners, it turns out, are increasingly the answer.

After a long four-and-a-half-year bear market, gold miners are still historically very cheap on a sector basis and relative to gold.

One of the best metrics to gauge their value is the HUI/Gold ratio. It measures whether gold stocks are over- or undervalued relative to gold. (The HUI is a widely followed gold stock index, the NYSE Gold Bugs Index). 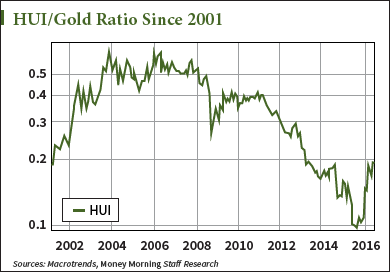 As you can see from this chart, gold stocks became obscenely cheap compared to gold in December 2015 and January. In fact they were cheaper than at any time since the secular gold bull market began in 2001.

At the current ratio of 0.18, gold stocks are nearly as cheap as at the start of this gold bull.

In the period after the financial crisis, from late 2008 until gold entered correction territory four years later, the HUI/Gold ratio averaged about 0.35.

Starting from current levels, gold stocks would still have to double in price just to reach the average valuation they enjoyed post-crisis. And that's after already doubling since late January.

This is an incredible opportunity...

The Sprott Gold Miners ETF (NYSE Arca: SGDM) is a great "one-stop" for gold stocks. It's performance-related, tracking the Sprott Zacks Gold Miners Index, which is rules-based and operates on a quarterly rebalance.

SGDM allocates to the healthiest companies in the sector, holding about 25 of the top names, whose revenue growth and balance sheet offer the best relative quality.

When I recommended SGDM back in early May, it soared by 32% within three months. Today, it's backed off, and you can still buy it at close to its early May levels.

So while "Too Big to Fail" commercial banks and central banks berate and show disdain for gold, remember that they're quietly buying gold miners.

It's high time we do the same.

Another Great Hard Asset Play: Investors have a brand new hard asset option for the protection and profits they'll need for the days ahead. Diamonds, in fact, are one of the best ways to get both, but they haven't always been easy to buy and trade. That's all changed now, and Michael Lewitt has prepared an investor briefing that shows you the best way to use diamonds now. Click here to get it, and you'll get his Sure Money service, too, free of charge.