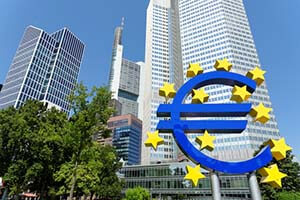 The Dow Jones Industrial Average slid this afternoon after traders reacted negatively to an announcement by the European Central Bank.

The ECB said it will leave its benchmark interest rate unchanged and that it anticipates low rates to remain for an "extended period."

Investors also weighed a stock downgrade of one of the market's most iconic technology companies.

The Dow Jones slipped more than 46 points as investors continue to weigh the timing of the next interest rate hike by the U.S. Federal Reserve. Investors are speculating on the possibility of a September Federal Reserve rate hike. The next FOMC meeting will take place on Sept. 20 and Sept. 21. So, will a September rate hike happen? We answer that question, right here.

Meanwhile, traders were weighing a statement by Iranian energy officials that the nation plans to increase output in the months ahead. That statement is a blow to the planned cooperation by Saudi Arabia and Russian energy officials. OPEC will meet later this month in Algeria to discuss a possible production freeze. However, for the last few months, Money Morning Global Energy Strategist Dr. Kent Moors has explained that ongoing politics between Iran and Saudi Arabia are the biggest obstacle to any deal getting done. In fact, Kent expects that no accord will be struck this month. Here's Kent's latest insight on crude oil prices and what OPEC will do next.

But the big news today was the very public downgrade of Apple Inc. (Nasdaq: AAPL) by one of Wall Street's top investment banks. This morning, Wells Fargo & Co. (NYSE: WFC) downgraded AAPL stock after it reevaluated the risks and rewards of the company moving forward. The announcement comes a day after Apple unveiled the iPhone 7, the iPhone 7 Plus, and the Apple Watch 2. Shares fell more than 2.6% after the WFC downgrade of AAPL stock. [Editor's Note: Despite what Wells Fargo said today, we believe that Apple stock is an absolute bargain at $105.50. Here's why we rank AAPL stock a "Buy."]