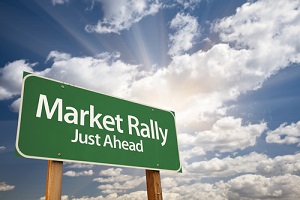 The Dow Jones Industrial Average rallied thanks to a surge in biotech stocks on Monday.

This morning, Atlanta Federal Reserve Bank President Dennis Lockhart said that the central bank should have a "serious discussion" about a rate hike this month. However, he said that the Fed didn't need to act with any urgency given the current state of the U.S. economy.

With the Fed in focus, Money Morning Capital Wave Strategist Shah Gilani says that market volatility is on the verge of roaring back in September. Check out what he has to say, right here.

Here's a look at today's most important market events.

The Dow Jones gained more than 239 points as expectations of a September interest rate hike faded. The never-ending chatter about interest rates continues to dominate the narrative about the markets today. This afternoon, Federal Reserve Governor Lael Brainard said that the central bank should keep monetary policy loose despite improving signs in the U.S. economy.

But the big news today was the health of Democratic presidential candidate Hillary Clinton. On Monday, the political and financial media were asking, "Will Hillary Clinton drop out of the presidential race?" Clinton was recently diagnosed with pneumonia and appeared to collapse during a 9/11 memorial ceremony in New York City over the weekend. According to reports, Democrats are nervous about Clinton's health, prompting speculation about the future of her candidacy. Here's the latest on Clinton's health scare and what to expect during the 2016 election.

Up Next: OPEC Needs This One Country to Boost Oil Prices – and They're About to Cave In