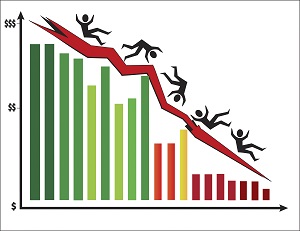 This morning, the Dow Jones Industrial Average was plunging as investors continue to speculate on the timing of the next interest rate hike by the U.S. Federal Reserve.

Markets in Europe and Asia were also sliding as traders raised expectations that the central bank could raise interest rates as soon as this month.

With the Fed in focus, Money Morning Capital Wave Strategist Shah Gilani says that market volatility is on the verge of roaring back in September.

Check out what he has to say, right here.

On Friday, the Dow fell 394 points as the markets increased the odds of a rate hike in September. According to CME FedWatch, the probability of a rate hike on Friday increased from 18% to 24%.

Now let's look at the most important market events and stocks to watch today, plus your economic calendar, for Sept. 12, 2016.

The Dow Jones Industrial Average projected a 71-point decline as investors continue to monitor the statements of Federal Reserve officials on the timing of the next rate hike. This morning, Federal Reserve Bank President Dennis Lockhart is speaking at the National Association for Business Economics about his view of the economy.

Oil prices were sliding again this morning as traders continue to worry about a glut in global supply. On Friday, the Baker Hughes Inc. (NYSE: BHI) rig count increased for the 10th straight week. The markets continue to weigh the possibility that OPEC and Russia could work to reduce global production in order to support crude prices. However, the odds of a deal are fading due to Saudi Arabia's political challenges.

But the big news this morning was in the intellectual property world. Shares of HP Inc. (NYSE: HPQ) were off nearly 1% after the firm announced plans to purchase the printer division of Samsung Electronics (OTCMKTS: SSNLF) for a little more than $1 billion.