Cuban issued his dire warning today (Monday) in response to a Trump interview on CNBC's "Squawk Box" this morning.

That's when Trump decried the U.S. Federal Reserve's current fiscal policy: "The interest rates are kept down by President [Barack] Obama. I have no doubt that that's the reason they are being kept down."

Mark Cuban: Trump "Hasn't Made Any Effort to Learn"

Cuban accused Trump of allowing "others to continue to make his decisions" for him on the campaign trail.

Cuban was reacting to a follower's suggestion that perhaps Trump was learning to control his tendency to make abrupt outlandish comments because the real estate magnate has thus far refrained from using social media to exploit Hillary Clinton's poor health.

When another follower jumped into the tweet thread to show her support for Trump – claiming that Trump was indeed "learning" to modify his typically unpredictable behavior – Cuban shot back:

"His Fed comments [this morning] prove he hasn't made any real effort to learn," the "Shark Tank" host tweeted. 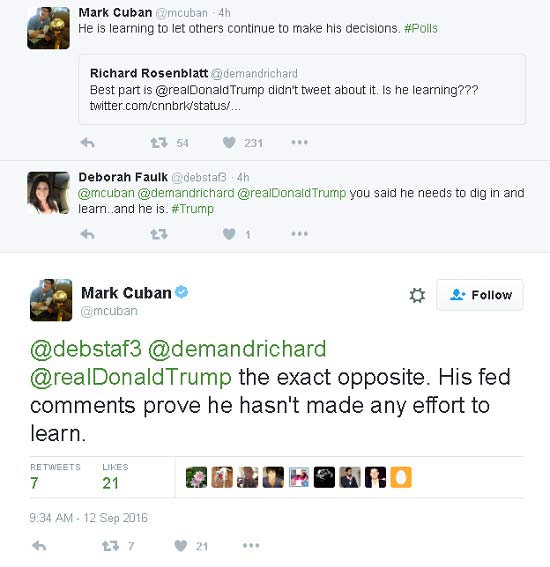 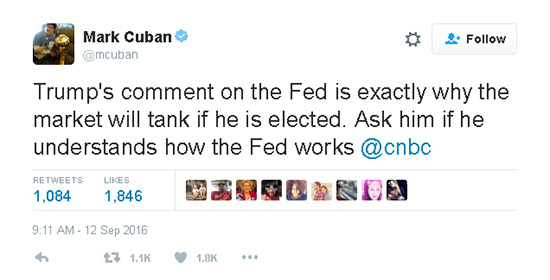 He tweeted to the candidate this message: 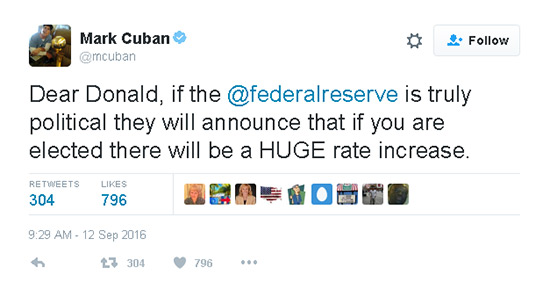 On July 21, during the GOP convention, Cuban launched a series of scathing tweets attacking Trump's talking points in real time.

Regardless of Cuban's personal vendetta against his fellow billionaire businessman, one practical question does arise from his angry tweetstorm…

Which Candidate Is Better for the U.S. Markets?

It's a question investors are asking.

Watch as Barton tells viewers what the stock market will look like under either a Hillary Clinton or a Donald Trump presidency, here…

This is left wing Hillary propaganda talk, scare tactics, if Hillary wins your taxes will increase, Hillary claims she will put bill in charge of the economy, that will be a mistake, the only reason Bill's economy was successful under his leadership was because of the computer and internet boom, which he had nothing to do with !

Rich guys are worried , why ?