This August of 2016 was one of the most placid in market memory, a stark contrast to the record high volatility of August 2015, to say nothing of August's traditional volatility. But last month's markets traded in the tightest range ever, a trend we're still seeing in September.

But... as sure as your summer tan will fade to pale, the coming market volatility will turn you white with fear if you're not prepared.

Now, when most investors think about volatility they think about the VIX, the Chicago Board Options Exchange (CBOE) Volatility Index. Often referred to as the "Fear Index," the VIX represents one measure of the market's expectations of volatility over the next 30 days.

And this upcoming 30 days - critical days for the market - could get extraordinarily rough.

How I Played a Part in Inventing the VIX

I was one of the traders on the floor of the CBOE who came up with the VIX. We didn't call it the VIX. We had no idea it would turn into the VIX.

It was 1983 and options on the OEX had begun trading. The OEX, which was originally named the CBOE 100, is a capitalization-weighted index of the 100 most actively traded stocks (based on options volume back when the index was created) at the CBOE, and was later renamed the S&P 100 when Standard & Poor's took over management of the index.

I was a market-maker in the OEX pit on the opening day of trading.

Back then we used Monchik-Weber computers, programmed with the Black-Scholes options pricing model, to determine fair value of the options we traded. The problem was the model's values usually weren't all that close to the actual, real-world prices of options.

Figuring out whether the calls and puts we were trading were priced commensurate with the risk in buying or selling them was critical. There had to be a reason why prices in the real world were different from the elegant, complex Black-Scholes model's valuations.

We figured it out.

In the free market, where true price discovery happens, investors price options based on their expectations, usually based on fear and greed.

By extracting the actual volatility measure out of the price of an option, which in the Black-Scholes model would be mathematically based on a measure of actual historical volatility, we could determine the "implied volatility" that investors created by pricing in their fear and greed.

Using front month calls and puts on the OEX, we started with five strike prices above and below where the underlying OEX was trading, stripped out the implied volatility in each option, and created an index of implied volatility.

In essence, that's what the real world thinks (in terms of how they price options) volatility is going to be in the near term.

Our work caught on, got refined, was applied to the S&P 500 Index options, and ended up as the VIX.

Here's the Real Reason Markets Move Up and Down

My motto is that money moves markets, but psychology moves money.

What the VIX tells us is where psychology is and what investors are feeling - most importantly whether they're feeling greedy or fearful.

So, when the VIX is low it means investors are comfortable and aren't paying wild prices for options. When the VIX rises it's because investors smell fear and start paying up for puts as protection, to lock in profits, hedge, and speculate that a downdraft is coming. 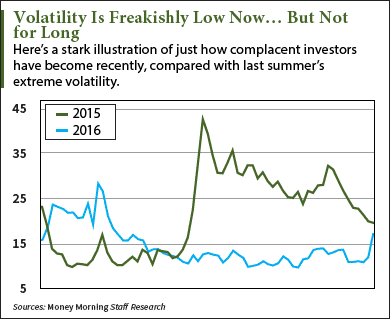 The fact that the VIX has been so low is partly telling us that investors are complacent and that they expect the "controlled" environment to yield gains as opposed to spikes and drops.

That's all artificially induced by central banks... and that's a big problem.

Complacency is only part of the psychology. The other part is apprehension.

Investors are not active. They're not aggressive buyers up here, so, like I said, they don't need to bid up calls or bid up puts to protect big positions they're putting on... because they're not putting big positions on. That's part of the reason the VIX is so "intensely subdued."

But that same complacency and apprehension can turn to fear in a New York second.

And that turn is coming up fast. This month, in fact.

Central banks are meeting throughout September, and any unusual moves - by that I mean unexpected moves - could trip up markets instantly.

Investors, partly because they're being fooled by a low VIX, have lost sight of the increased cross-asset correlation that has so many investors in so many of the same positions.

A sell-off anywhere, in any asset class, can easily trigger margin calls and selling across asset classes, which could theoretically cause a global rout in very short order.

Here's where it could be worst...

The Markets Are Late for "Falling Out of Bed"

The two biggest positions investors have on right now are in bonds and currencies. That's not a coincidence; they are directly related.

It might seem strange that investors are bending over backwards to buy negative-yielding bonds in Japan and Europe, but it's all about the currency piece of the trade and front-running central banks.

For example, the Japanese yen has been rising because investors are buying yen and parking their yen holdings in Japanese bonds. The Bank of Japan has been buying all kinds of Japanese bonds, taking yields into negative territory.

And as more investors move into those types of trades, front-running the BOJ, they have to buy more yen, bidding up the yen. And like magic, investors make money on the currencies they bought to buy the bonds they're holding.

That's a monumental correlative relationship. And if one of these assets so much as sputters, the other will come tumbling down.

They've got a long way to fall. These positions are thick, and I mean thick, leveraged well into the trillions of dollars.

With U.S. elections coming up, political craziness in Brazil, the Middle East, Europe, China, North Korea, and all over, something somewhere could give way, hitting currencies and triggering massive volatility and panic selling of bonds.

We're getting ready in my newsletter services for a crazy fall - yes, I mean autumn - and the potential for plunging markets across multiple asset classes.

Volatility measures, first and foremost the VIX, will be the canary in the coal mine. I'll be watching it very closely in the coming weeks.

Good luck hanging onto that tan.

Here's a Trading "Script" for This Market

This simple plan has been making people rich for decades. And with everything Shah's expecting right now, it just became especially effective, with dozens of opportunities for profits already. Click here to get the "script" on these big-name, big-money gains.

don`t believe a word the gurus say.
they are always wrong,