There was a lot to read "between the lines" at China's recent coming-out party as a bona fide economic superpower, otherwise known as the G20 summit in Hangzhou.

The world's most populous nation hosted a record number of delegates from the emerging economies, making it one of the most inclusive summits ever.

But President Obama got a distinctly chillier reception; he was denied the use of an air stair and a red carpet as he was forced to disembark from the belly of Air Force One. The American media contingent were "pushed back" by Chinese guards, and National Security Advisor Susan Rice was nearly kept out of the official motorcade.

Even for the protocol-obsessed Chinese government, any one of these "snubs" could be explained away as a mistake or misunderstanding, but taken together, I believe they amount to nothing less than an unmistakable signal that China is ready to assert itself on the world stage as a leader not to be ignored.

But here's the thing... China's swaggering new assertiveness is backed up by an impressive series of economic milestones and global accomplishments.

There's no doubt that this is where some of the 21st century's biggest fortunes will be made, and with this fund, there's no reason why Americans should miss out...

China's brashness comes as the yuan is set to be added to the International Monetary Fund's Special Drawing Rights (SDR) basket of global reserve currencies in just a few weeks' time, on Oct. 1, 2016. 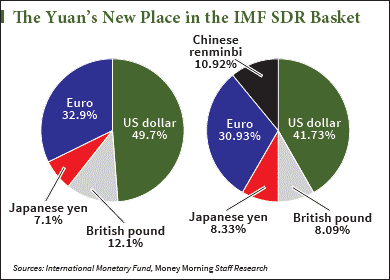 Though it's a long way from a safe-haven currency, in some ways it puts the yuan on par with the pound, yen, euro, and dollar.

That should help pave the way for the yuan to become "market-priced," based on its exchange rate with other currencies.

In early August, Reuters reported that the World Bank and China Development Bank were looking to issue SDR-denominated bonds in the domestic Chinese market.

At the end of August, the World Bank had issued $700 million worth of three-year notes in China's interbank market.

It's all part of the internationalization of China's currency, deliberately targeted at challenging the U.S. dollar's hegemony.

Though all these efforts help bring China on par with major global economies, the country's stock market is where investors should be paying the most attention.

As it stands right now, Chinese stocks aren't even included in world stock indices. That's largely due to the restrictions foreign capital faces in Chinese markets.

And yet the country's stock market, like its economy, is the second largest in the world.

But that's going to change.

Providers of major world stock indices have said that Chinese shares will start being included in their indices.

In fact, numerous fund and institutional money managers will be compelled to buy, as they start grabbing Chinese stocks left and right to mimic their revised benchmarks.

Over the next few years, that could mean hundreds of billions of dollars flowing into Chinese shares... maybe as much as $1 trillion.

I believe we're seeing that wave of buying already start to take effect.

After a 2015 marked by extraordinary volatility, the Shanghai Composite Index has been in a "stealth" uptrend ever since late January, getting stronger and stronger as China's economic data begins to improve. The flagship index is ahead a stunning 16%.

Which invites the question: Why go with China over the United States?

Well, the answer to that is twofold: value and potential.

This investment delivers both by the truckload.

Instead, the iShares China Large-Cap Fund (NYSE Arca: FXI), which holds 50 large-cap Chinese stocks listed in Hong Kong, is a much better deal. It was the first Chinese equities exchange-traded fund (ETF), and compared to the S&P 500, it's irresistible, trading at a P/E of 9 and yielding 2.9%.

These are some of China's largest public companies, including names like China Mobile, ICBC Bank, China Construction Bank, CNOOC, and Petrochina.

These companies are hated by the market right now. It's pretty clear that the market can't seem to get over last year's extreme Chinese volatility and, even more shortsightedly, sees China's enviable 6.7% annual GDP growth as a "slowdown."

They're leaving some serious potential gains on the table. This ETF, which is a measure of market sentiment, has 102 million shares outstanding as of the start of September. In July, that number was nearly 175 million. 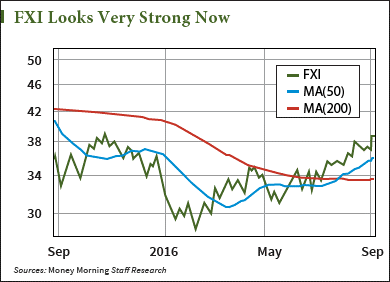 Topping off this bullish action, the FXI has just bested its August peak, the previous high for the year.

FXI's ongoing high-profit run is the perfect way for American investors to get exposure to China's position as an economic superpower as trillions of dollars begin their inevitable flow into Chinese stocks and the yuan.

The advanced Western economies are barely able to eke out 1.5% GDP growth... in a good quarter. But elsewhere in the world, as in China, growth routinely tops 5%, 8%, even 15%.

We believe that kind of profit potential should be available to everyone, so our Chief Investment Strategist Keith Fitz-Gerald - the guy who took global investing mainstream - recommends specific companies and strategies that put you out in front of the growth that's still very much underway in markets all over the world. Click here to learn more...