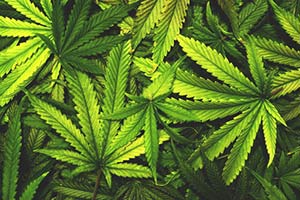 Americans using marijuana for recreational or medicinal purposes is at an all-time high...

One in eight U.S. adults say they currently smoke marijuana, according to a July Gallup survey. That ratio represents 13% of Americans, up six percentage points from three years ago in July 2013. 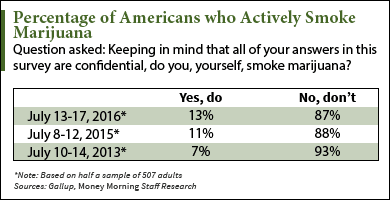 Even without these poll numbers, it's clear that public acceptance of marijuana has surged in recent years...

In just the past six years alone, 15 states have legalized marijuana in some form. Currently, 23 states plus Washington, D.C., permit the use of marijuana for medical purposes. Four states currently allow recreational marijuana use: Washington, Colorado, Alaska, and Oregon.

And in November, these nine states will vote on various levels of marijuana legalization...

Don't Miss: How to Find and Research the Best Marijuana Stocks to Buy

With so many states prepared to move forward with marijuana legalization, the marijuana market is bursting with profit potential. Already, preliminary estimates suggest it will reach $35 billion in value by 2020, according to a 2015 report from the Bank of America Merrill Lynch.

You can get a piece of this staggering growth - right now - by investing in one of the best marijuana stocks to buy.

Money Morning Director of Tech & Venture Capital Michael A. Robinson recommended it to readers on March 27, 2014. Since then, it has helped readers beat the market by more than 620%. And this pot stock still has room to run...

In fact, Robinson still believes that this stock is the very best play in the emerging cannabis biotech industry. Find out more, right here...

It's about time this plant given to us by God Ezekial 34:29! If all you had was hemp seeds to eat for 3 months you would not be starving , and all the many other facts about this MaRvElOuS plant! Hallelujah!!!