I've been forecasting low-$60 oil by the first quarter of 2017 since earlier this summer. As I mentioned last week, the signals I saw in New York and London recently, which essentially telegraphed an end to the supply glut and a firming "floor" of price support, only strengthen the case.

In the meantime, a bit of idle speculation by Boston Fed chief Eric Rosengren about an interest rate hike and news of lower demand have thrown some cold water on what had been a strong 23% rally.

Then, predictably, the scaremongers used weather as a reason to call for prices to slide even further.

Here's the thing… None of that really makes a difference.

Oil Shorts Dried Up and Haven't Come Back 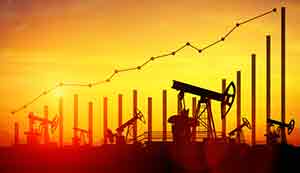 Through the end of the first week of September, short positions on oil (bets that oil will go down) decreased by record amounts. In the face of an almost 25% rise in futures prices, more shorts were unwound than for any equivalent period since figures were first compiled a decade ago.

That's great news for oil prices and another signal that my oil price forecast is correct. But before I get that, let me first explain why shorts and other artificial manipulation are so important to the price of oil.

This manipulation is based on the relationship between "paper" and "wet" barrels – futures contracts in oil as contrasted to actual consignments of crude. The futures market was created to stabilize the market and remove pricing control from the control of a few major producers to a wider market of investors.

This has largely been a success. Volatility still exists, as we've seen this week, but the cycles of instability are much shorter and smaller.

However, with the advent of even quicker computer-based trading abilities, shorting has become more and more important…

When a market sector – especially one dealing with commodities – is moving up or down, traders always try to ride that movement to profits by running "paper trades."

If the underlying commodity is drifting up, and futures are indicating that such a trade will continue (a situation called "contango"), long positions tend to increase.

On the other hand, if prices are falling, as was common with oil until recently, short positions are the rule.

The process of shorting oil futures is similar to shorting a stock. A trader takes a short position in oil by "borrowing" contracts from a broker and then immediately selling them at market. Later, the trader needs to go back into the market and buy the contract, returning it to the broker.

With oil futures usually standing for 1,000 barrels at a time, such shorts are not made by normal investors. But big institutional players do it all the time.

For example, let's say oil is trading at $45 a barrel (about where it was this morning). That means that the contract that a short-selling trader "borrows" has an effective face value of $45,000. By immediately selling the contract, the short seller makes that much money.

Then, if their guess that the price of oil will go down is correct, the trader can buy back the contract for less. Suppose oil falls to $42 per barrel, putting the face value of the contract the trader sold (for $45,000) at just $42,000.

The $3,000 difference is the profit made from the short.

Usually, shorts help to stabilize the broad market by bringing in investment that sees things differently than other market players.

For as widely used as it is, these days, crude oil is much more important than "just" a commodity.

That's because the majority of daily oil trades are denominated in dollars, giving oil a fundamental connection to currency exchange rates and making crude a de facto global vehicle for stored value, just like safe-haven currencies or gold.

That's the downside of shorting: It makes the influence of shorts on crude oil much more pernicious.

During the protracted decline of oil prices from late 2014 until the beginning of this year, shorts tended to accelerate oil's downward trajectory. I even developed an algorithm to determine what part of the decline was occasioned by shorts and other secondary derivatives, so I could easily see the actual market price of a barrel of oil.

But now, things are changing…

This Was One of the Biggest "Short Squeeze" Situations Ever

Oil was off a little more than 2% yesterday, but as I mentioned last week, the forces needed to get us above $50 are still going strong. There exists a stable floor from which we'll see a gradual movement up.

All this puts short runners in a difficult spot. Because the only way for them to close their position is to buy contracts at the going rate, when the market turns against them, they risk losing a lot of money. In fact, there is theoretically no upper limit to how much you can lose on a short, because, again theoretically, there's no upper limit on the price of a futures contract or stock.

Now, this risk can be reduced by trading options at the same time, but the loss is still a loss.

If the trader thinks a price rise is just a momentary setback and will soon go away, the shorts can be "rolled over" into new ones, to extend the trade.

But if the market looks like it will move up or stabilize for a long time, the short position must be closed as quickly as possible, to guard against even higher losses in the future. When a large number of short sellers close their positions at the same time by buying at market prices, the resulting jump in prices is called a "short squeeze." This most recent short squeeze – one of the biggest in history – was one for the record books.

I don't think this week's slump in oil prices will embolden short runners once again. They aren't going to be back in charge anytime soon, "calling the shots" and dictating the trends as they did earlier in 2016. The floor in oil prices is becoming too well established for that to happen.

Rather, I continue to hold to my forecasts of mid-$50s per barrel in New York by late fourth quarter of this year and low $60s in the first quarter of 2017.

This crude price dip won't last, but the last time we saw a situation like this, oil snapped back with a force that sent oil stocks on a moonshot. One company jumped 798%, another climbed 1,335%, and one company even turned every $20,000 invested into $1,200,000. Exceptional gains no doubt, but even a fraction of gains like that could make you a fortune. And according to Dr. Kent Moors, the same situation is happening all over again. To find out how you could set yourself up to turbocharge your gains, just go here.

How do you see oil going to $60, when it has been in the same trailing range for more or less ten months, as we are heading into a global recession and npl's start to pick up for E&P's and the market is going to go into a total nosedive