The reason behind why the Apple stock price is rising now stems from one major factor that most "experts" missed...

Apple shares' 11.5% spike over the past few days is due to the radically shifting expectations for sales of the new iPhone 7. 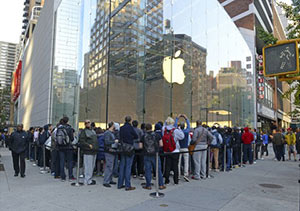 Apple Inc. (Nasdaq: AAPL) only introduced the latest models of its flagship product just over a week ago, on Sept. 7. Leading up to the event, analysts and tech pundits alike were convinced the iPhone 7 would be a yawner of an upgrade that would fail to revive sales of the device.

Apple had no surprises for them - the announced improvements to the iPhone 7 almost perfectly matched the pre-event rumors.

The new iPhones were the same sizes with basically the same screen, although they got improved battery life, more storage, and waterproofing. Worst of all, Apple removed the audio jack, a move sure to anger customers.

Then Apple said the next day that it would not announce the first weekend sales numbers as it has done in the past. (The iPhone 7 goes on sale tomorrow.)

That immediately sparked speculation that Apple was seeking to cover up a disaster in the making.

Wells Fargo & Co. (NYSE: WFC) even downgraded Apple stock. The gloom sent the AAPL stock price down 4.82% over the next two days.

Then reality set in...

Why the Apple Stock Price Is Rising This Week

The carriers started taking pre-orders Sept. 9. And this week two of them, T-Mobile US Inc. (Nasdaq: TMUS) and Sprint Corp. (NYSE: S), reported sales figures that shouldn't be possible.

"The first four days of the iPhone 7 launch are by far the biggest ever for T-Mobile. It's four times bigger than the iPhone 6 for us, at this stage."

A Tuesday press release from Sprint announced that iPhone 7 pre-orders were up 375% over last year's iPhone 6s debut. Impressive, but the iPhone 6s models haven't killed it.

That's why T-Mobile's announcement was such a show-stopper.

"The first four days of the iPhone 7 launch are by far the biggest ever for T-Mobile. It's four times bigger than the iPhone 6 for us, at this stage," T-Mobile CEO John Legere said in a Periscope interview on Tuesday.

Think about that. The iPhone 6 models were the first iPhones to have the larger screen sizes, and sold in phenomenal numbers. According to Legere, the iPhone 7 so far has quadrupled the sales of that blockbuster product.

Don't Miss: How to Wring Maximum Profits from These "IPO Icebreakers"

Late yesterday (Wednesday) Apple even joined the party, announcing it had completely sold out of the larger iPhone 7 Plus.

Meanwhile, Apple's chief rival Samsung has been suffering through a public relations disaster. The South Korean tech giant has been forced to recall its Galaxy Note 7, a device intended to compete with the iPhone, after customers were injured by exploding batteries.

Suddenly the AAPL stock bears went silent, while the bulls came out of hiding.

"It's just a great, stable company on top of the fact that the iPhone 7 sales are doing so well is just one more reason to keep on holding it," Erin Gibbs, chief equity investment officer at S&P Global, told CNBC yesterday.

For the record, Money Morning predicted strong sales for the iPhone 7 even before it was announced last week. [See: Why Apple Stock Is a Buy as the iPhone 7 Debuts]

We recognized that while the iPhone 7 might seem "boring" to analysts and technophiles, the changes Apple made are exactly what the majority of its customers want most.

Why the iPhone 7 Sales Will Drive AAPL Stock Higher

Customer surveys for years have suggested that the typical smartphone buyer isn't looking for gee-whiz features when shopping for their next device.

Instead, they want improvements that will benefit them in everyday use - better battery life, more storage for photos and videos, better cameras, more responsiveness.

A June survey by Kantar Worldpanel of iPhone 6s owners thinking of upgrading asked which new iPhone 7 features would be most likely to lure them into taking the leap. Three out of four said improved battery life, two-thirds said a better camera, and just over half said more storage.

The iPhone 7 scores big on all three counts. 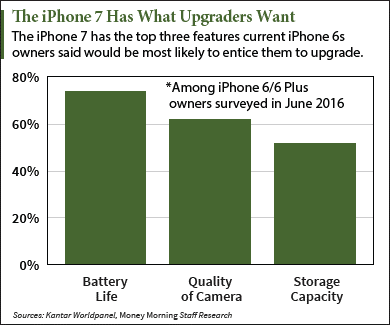 Since the iPhone 5, Apple's offerings have been more than competitive with most of its Android competition on battery life. Now Apple has increased battery life by two hours for the iPhone 7 and one hour for the larger iPhone 7 Plus.

Apple also increased storage across the line, doubling the minimum from 16 gigabytes to 32 GB.

The iPhone 7 camera is much improved in low light conditions, and the iPhone 7 Plus has a dual camera setup that will allow for special effects like depth of field photography.

Other top things people look for are brand name and ease of use - two categories Apple already had locked down.

As a bonus, Apple made the iPhone 7 far more water resistant - it can survive being fully submerged for up to 30 minutes.

If the success of the iPhone 6 taught us anything, it's that giving customers what they want most results in huge sales. The most compelling features of the iPhone 6 models were their size - hardly a whiz-bang feature, but one millions of people coveted.