After more than a decade of closely watching gold prices and trading the gold markets, the amount of action never ceases to amaze me.

And this past week was no different, when we saw considerable volatility along with a pretty strong downward bias.

Once again, the Fed has had a huge impact on gold traders, fund managers, and investors who are all trying to parse through the "Fedspeak" for clues on the direction of interest rates.

With the upcoming September FOMC meeting next week, several Fed members have been making both hawkish and dovish cases for raising interest rates.

Sadly, we're at a point where traditional market forces like supply and demand no longer carry much weight. Instead, it's sentiment and "forward guidance" that seem to rule.

In any case, underlying conditions have not changed the outlook for gold prices this year. It remains as bright as ever.

Before I get to my gold price prediction, here's a look at this past week of volatility for gold prices…

Why Gold Prices Were So Volatile This Week

Gold prices rounded out the previous trading week on Friday, Sept. 9, facing the headwind from the surging dollar. The U.S. Dollar Index (DXY) jumped nearly 75 basis points intraday, only settling back a bit. Because of that, gold prices opened down at $1,334 before closing the day at $1,328.

Stocks saw a big sell-off that day too, mostly due to renewed speculation of a possible rate hike at the September FOMC meeting.

Gold prices continued to decline Monday, opening at $1,328 before falling to $1,321 by 1:00 p.m. The dollar index bottomed then rose slightly later in the day. Gold managed to regain some lost ground, closing at $1,327.

Tuesday brought more weakness to the price of gold per ounce. It opened for NY trading at $1,325, but a surging dollar pushed it down to $1,318. More hawkish Fed comments and concerns about oil being in oversupply longer than originally forecast hit markets once again. Investors bought dollars as a haven, and the VIX volatility index soared almost 18%.

Gold prices recouped some of their losses Wednesday, thanks to the dollar losing some ground.  The price of gold closed Wednesday at $1,322.

Weakness in the gold price returned Thursday thanks to a strong DXY. Gold opened for trading at $1,322 before hitting $1,314 by late afternoon.

Here's how the DXY acted over those five trading days: 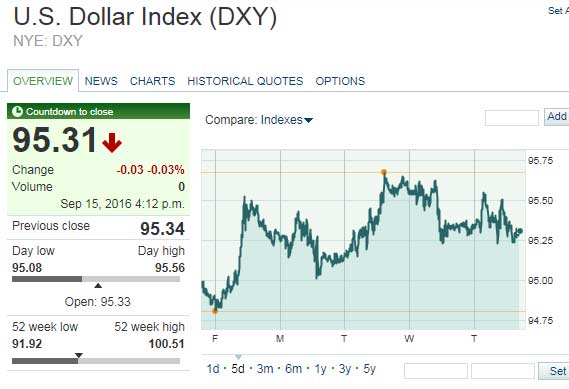 Now that we've taken a look back at gold prices this week, here's what will be moving the precious metal in the rest of the year…

One of the most significant events of the past couple of months has been the breakout of higher long-term Treasury yields. While many think that's challenging for precious metals, that's not necessarily true. There have been numerous periods when both interest rates and precious metals headed higher simultaneously for years at a time.

Here's what the likely bottoming and breakout of 30-year Treasuries looks like: 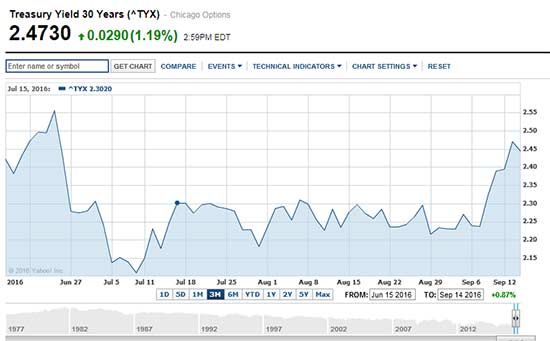 In fact, if investors think about the fact that rising rates are likely reflecting impending inflation, then it makes perfect sense that precious metals, a natural inflation hedge, would be rising as well.

So what's in store for gold prices near and long term?

Technically, gold's been softening over the past trading week. 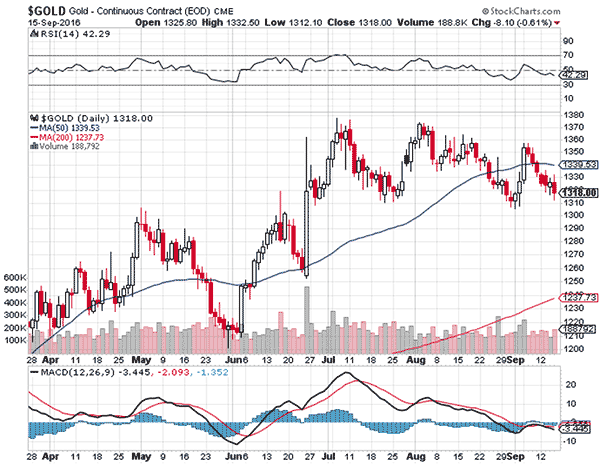 We can see gold slowly once again approaching the $1,310 level, which it has already tested about four times in the past two-and-a-half months. That will be a key level to watch. If it doesn't hold, then the next target could be the $1,270 to $1,290 range, or perhaps even a bit lower.

Once gold ends its consolidation/correction, it will head higher. I'm still viewing the $1,400 level and possibly higher for gold prices over the next few months.

Up Next: Despite the recent pullback for gold prices, gold stocks are still among the best investments to make now. That's why we just recommended one gold stock that could gain 49% in 12 months…