Investors ignore the Fed dot plot at their peril.

While it doesn't get as much attention as the decisions of the Federal Open Market Committee (FOMC) meetings or the comments by Fed Chair Janet Yellen, the Federal Reserve's dot plot is an important guide to where the central bank wants to go with interest rates in the future.

And that means it's closely watched by Wall Street, giving it the ability to influence markets.

Formally known as the U.S. Federal Reserve's Summary of Economic Projections, the dot plot is a simple tool the Fed introduced back in 2012 as part of its efforts to increase transparency. It's released four times a year, at alternating FOMC meetings, at the same time as the committee's policy announcement.

At its most basic, the Fed dot plot is a chart showing the outlook for interest rates for the current year, the next two years, and the "longer run." Each of the 17 members of the Federal Reserve board participates, even though only 10 are voting members of the policy-setting FOMC at any given time.

The members make a call for each time period; those are the dots. Each dot is a member's estimate of what he or she thinks the Fed interest rate should be at that time. 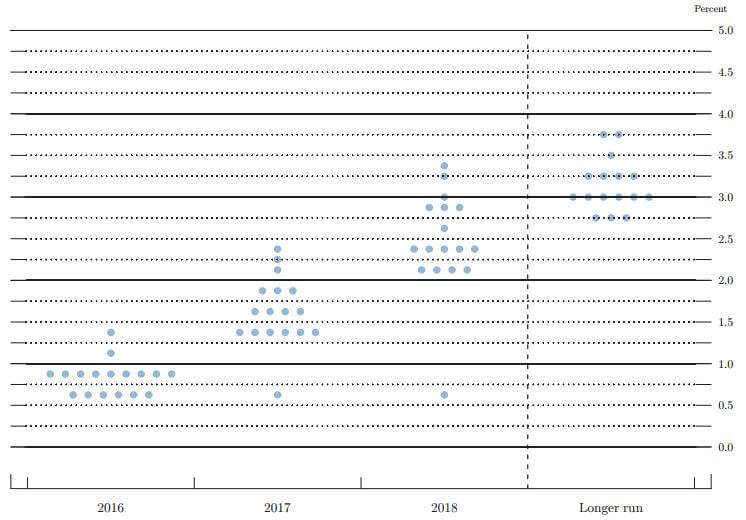 Investors need to be cautious not to read the Fed dot plot as a prediction of what the Fed is actually going to do. Because the Fed is constantly considering new economic data in its analysis, any prediction of a change in the Fed interest rate - even one by the members of the Reserve Board - is destined to be inaccurate.

But there is other information that can be gleaned from the Fed dot plot...

"[The dot plot] shows what each participant thinks the Fed should do, based on his or her individual forecast of how the economy will evolve and what the optimal response would be," wrote former Minnesota Federal Reserve Bank President Narayana Kocherlakota in a Bloomberg opinion column in March.

So the Fed dot plot is essentially a window into the minds of the Federal Reserve members.

Now here's why the Fed dot plot has such a huge impact on Wall Street...