Access Your Profit Alerts
Sign Up for Money Morning and get your free report:
"The Best Stocks to Buy Now"
How to Buy Bitcoin
Twitter
Stocks: AFL, BAC, SCHW

We all know that the FOMC meets on Sept. 20 and Sept. 21 to play the "to raise or not to raise interest rates" game. And there are a lot of officials at odds about it.

Boston Fed President Eric Rosengren has already made it crystal clear that he wants an interest rate hike - and soon - while others, like Fed Governor Lael Brainard, disagree.

And last Monday, Brainard gave a speech stating that the case for raising rates is less compelling, citing concerns over the effects slowing global economies (such as China) could have on the U.S. economy.

But in the end, I'm going to be watching something completely different.

And if the U.S. Federal Reserve does agree to finally raise rates and actually sets a date to do so...

These three industries stand to gain the most.

Why Bankers, Brokers, and Insurance Agents Say "Yes" to a Fed Rate Hike

There aren't a lot of industries out there that would benefit from higher interest rates.

But these three do...

The banks have gotten a lot of attention from the press lately - and for all the wrong reasons. That said, in this environment of low interest rates, the banking industry is limited in what it can charge on loans. The net interest margin (which is the difference in what they charge on loans and earn on other investments) has declined a considerable amount.

But this changes if the Fed raises rates. When interest rates are higher, every bank in the industry will have the ability to charge more on the loans they issue.

And a good bank stock to watch if and when rates are raised is Bank of America.

Now, it may have missed on the earnings per share number in its last report, but BAC's reported revenue was much higher than estimates - by almost $2.5 billion. And if interest rates are raised by just 1%, both in the short term and long term, BAC projects an extra $4.6 billion added to its annual net income. 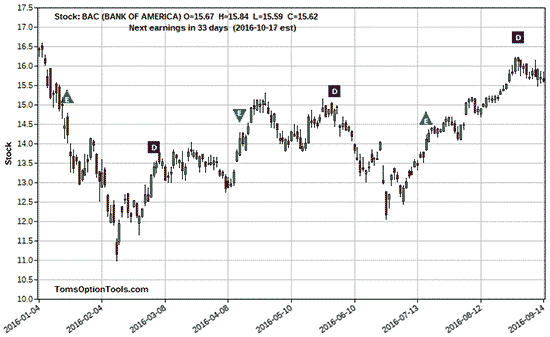 The chart above shows the price movement of the stock since Jan. 4. And although it's had some dips, BAC has shown an upward trend since March.