By now we all know that Wells Fargo & Co. (NYSE: WFC), one of America's premier banking giants, got slapped with $185 million in fines to settle charges of widespread fraud.

Or was it a screw-up? Maybe management, compliance officers, risk monitors, and auditors simply failed to catch thousands of employees who happened to be engaged in a massive and likely criminal enterprise going back five years.

In fact, this was encouraged by pervasive "trickle-down" bankster culture that puts a premium on profit above, well, everything else. Wells Fargo just managed to get caught at it.

The truth of this isn't pretty... 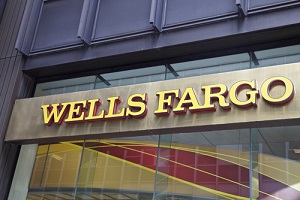 In other words, the Wells' media accolades are plastered on thick and heavy. It's broadly admired (or at least it was), even by an American public who are sick to death of big banks and who, by now, can largely see through them.

Despite the warm, fuzzy feeling Wells seems to give Americans, this is a big bank: Its $1.9 trillion in assets are handled by 269,000 "team members" who deal with 70 million customers out of 8,800 locations.

I've got some more big numbers to talk about...

Wells Fargo has long prided itself in its ability to cross-sell its customers different banking and financial services. Customers with multiple accounts and services are considered "sticky" customers who aren't inclined to leave the bank.

The company reports that its customers use an average of 6.15 services, the highest in the industry.

Cross-selling isn't just a way to keep customers, it's a way to make more money - a lot more - out of each customer. In fact, cross-selling really shines out in Wells' financial and proxy statements.

It shines out so much that cross-selling bonuses and commissions account for between 3% and 15% of sales associates' salaries. The practice is so important to Wells that many employees reported being fearful of losing their jobs should they miss sales goals.

In the article, Reckard writes, "The relentless pressure to sell has battered employee morale and led to ethical breaches, customer complaints, and labor lawsuits."

Employees reported being forced to work after-hours and weekends to make up missed quotas. The Times reports one branch manager was constantly told she'd "end up working for McDonald's" during hourly browbeatings masquerading as "conference calls."

And now we know that 5,300 "team members," bankers, and branch managers who allegedly set up bogus accounts for customers who never authorized them, to rip customers off and pad their own salaries and bonus payments (and perhaps save their jobs or have a weekend off once in a while), all over the past five years, and all in offices across the country.

Five years. Across the country.

Thank you for this article. Sadly, no longer hard to believe…

More than ridiculously miniscule fines, what I would like to see is criminal prosecutions. Not only of people who engaged in this practice but also of the people at the top; they are also culpable.

The situation is worse in Canada as our regulators don't scrutinize proceedure related to account opening. Eg the terms of contracts offered investors to ensure the clauses are aligned with law. So would they be able to nab a wells Fargo set up? Even assuming the political will were there. Your term chief sandbagger was right on

Thanks once again to Shah Gilani for describing the crimes of these organized criminal enterprises that have paid for protection by the Gov't. and are subsidized by the US taxpayers.

Thanks for pointing out the nature and extent of the vile whitewash being applied by top executives to shield themselves from the righteous wrath they deserve.

The absurdly low penalties act as an incentive for these evil people.

Is it even possible to get justice when the "regulators" have been paid for by the same people they regulate? I don't think so.

These people (banksters and bought off politicians) are destroying America by poisoning peoples faith that the American Government actually works anymore.

In the end, I predict the accumulation of this type of corrosive corruption (which is happening in all too many segments of society) will result in catastrophe for this country.

thanks for the info on wells Fargo. They screwed me by racking up fees on a closed account. Now they show I owe them over $300 on my credit. I was wondering if I could take them to up. I think a local Judge may like to return some of the fees to the people. small claims and hit them

Diligently look for a "Class-action " suit to join. You have solid grounds and evidence to add. Go for Punitive judgements.

I am living on a retired teacher's pension, about $1350 per month. I also have disabilities but have not gone for Medicaid because the dividends from my portfolio have been getting me by.
I left both Suntrust and Wells Fargo for hat I considered fraudulent actions. I do have accounts inherited through my dad in TD Ameritrade. They have opened and closed several accounts in my dad's name and in mine. They opened a margin account and claim that I owe them $147,000. They are charging the entire account 7.5-8.5 interest, yet cannot prove I opened that account, nor prove that I deposited the 2 k which is required. I have been in contact with FINRA. This company even took dividends and sales of stocks to pay for FDIC insurance. This started in January of this year. When I asked them to stop as they were supposed to do, they continued. I have yet to get a statement of the 2 extra accounts or my Dad's accounts. My dad passed away in 2010, but I am the Executrix of all of the accounts. I do not have enough money coming in. I tried to take the securities out at the end of July but I had to agree to owing approx. 18,000. I would not agree but did sell 80k of stocks and when they cleared I took 27k. They are claiming I borrowed that money. Please help as I can't fathom how 18 k at the end of July can become 147k.
Please help to guide me as to whom I should call now.
Thank you,
Barb

"Monkey see, monkey do." They are just following the example set in the White House, other governmental agencies and other high ranking businesses. It's all about money, power and greed. Since they all have their hands "dirty," they are not willing to put any teeth into the penalties levied. The saying, "Money is the root of all evil" certainly rings true.

I think you'll find the expression is actually "the love of money is the root of all evil". Money (in the strictest sense) is just a means of exchange…..

We knew this was going to happen as the banks have gotten bigger. Monopolies abound when it comes to banking and financial services. Maybe everyone need to close there accounts at Wells and find a nice local bank to work with.

You will be treated so much better.

Like the drug cartels when they lose an airplane or drug ship. All figured in ahead, actually a small part of their overhead. American taxpayers are indirectly footing the bill anyway. There's more money under the table than in plain sight. What will a man give in exchange for his soul? KCW

Obama administration is a criminal organization. In .2007 not a single banker went to jail .They bought and paid for the Obama .Same way now they bought the Clinton .Look at her tax return 10.5 million dollars speaking fees . That is nothing but bribe by wall street The whole system is so corrupt

Wells Fargo execs have proven themselves to be snakes.
Elizabeth Warren, unfortunately has proven herself to also be a snake. She lied herself into Harvard & the Liberal voters elected her into the Senate with the expectation of being given more unearned entitlements.

Part of this reminds me of the bad judgment we've seen within government agencies, too. This is like the IRS investigations into the activities of the administration's political opponents. At the end of it all, Lois Lerner gets a giant retirement bonus without having to pay any of it back. Here, Carrie Tolstedt will apparently get to keep her pay and bonuses without having to pay back the bank for her activities.

On a similar note: I don't like the idea that these fines go to the several government agencies that followed the evidence, instead of the customers who had funds kited from their accounts to finance this scheme for the banksters.

I work for a Major retailer ,
we have , HAVE to open credit card account every week , if you do not meet your quota , you get downgraded , at time of financial evaluation , it come into factor , you did not open credit card account , you get the bare minimum , if you open lot's of them you get gift card $$$ . The reason is simple with a store card you spend close to 40% more than you expected to when you first walked in , do yourself a favor destroy these cards but do not cancel them as it will affect your credit . let them become inactive ….
These free miles are not free You are paying them as every merchant is taxed for accepting them in short if your purchase is taxed on 10% in reality you can add up to 5% for the card , would you like to pay 15 % in taxes . when you use the card it is exactly what you are doing ……