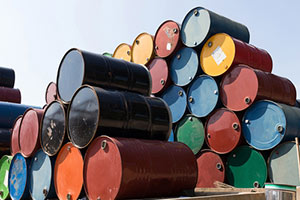 Crude oil prices today (Wednesday) are surging after an unexpected decline in U.S. crude inventories. The price of crude oil is also soaring thanks to a service workers strike in Norway, which has endangered North Sea output.

After wage talks broke down Wednesday, more than 300 Norwegian oil service workers went on strike. The strike affects the operations of five large subcontractors to the country's oil and gas industry. The dispute will force oil firms to cease drilling of some wells on Norway's continental shelf. If the strike is a prolonged event, it may also impact output from Western Europe's top crude and gas producers.

While crude oil prices are up in morning trading, they could fade ahead of today's FOMC meeting. At 2:00 p.m., Fed policymakers will announce their decision on interest rates.

The overwhelming consensus is that the U.S. central bank won't hike rates. Heading into the meeting, market odds of a rate hike are just 15%. The likelihood of a December rate hike, however, has risen to 64%, according to CME Group.

Oil traders are bracing for volatility today. According to the Bespoke Investment Group, September is the fourth most volatile Fed day, with an average market move of 1% (in either direction) following the September FOMC meeting.

And if the Fed leaves rates unchanged, oil prices could spike further still.