Yesterday the quarterly Microsoft dividend got a $0.03 raise to $0.39, but that’s not what grabbed the headlines this morning. 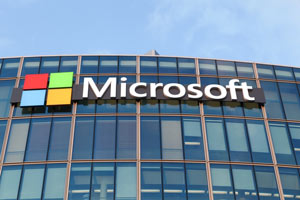 when completed, repurchase about 9% of the tech giant’s outstanding shares.

That was the news that stirred Wall Street today. In the wake of the announcement late yesterday (Tuesday), Microsoft stock rose more than 1% in after-hours trading. Today (Wednesday), MSFT stock is holding on to most of those gains.

But investors shouldn’t get too excited about stock buybacks from any company. The buyback strategy is mostly an illusion that makes earnings look better than they otherwise would.

The modest Microsoft dividend hike, on the other hand, offers true value to MSFT investors. The $0.03 increase in the MSFT dividend puts the yield at 2.7%.

That’s comfortably above the 2.08% average for Standard & Poor’s 500 stocks that offer a dividend. And the Microsoft dividend is a lot higher than the 0.83% average for companies in Dividend.com’s Application Software category, into which MSFT falls.

Why the Microsoft Dividend Is a Difference-Maker

You see, Microsoft has made it a habit to raise its dividend every year, and usually by a substantial percentage. It’s only skipped one year (FY 2010) in the last decade.

And while those Microsoft dividend increases of a few cents per share every year may not seem like a big deal, they definitely add up for long-term investors. 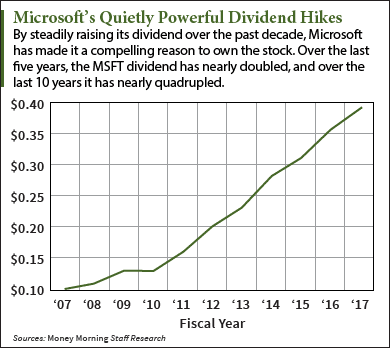 Anyone who’s held MSFT stock for the past 10 years would have seen a nearly fourfold increase in their annual dividend income, from $40 to $156.

That’s no surprise to dividend stock investors, though. A 2013 Morgan Stanley (NYSE: MS) study revealed that since 1930, dividends had supplied no less than 42% of the gains in the S&P 500.

And that’s on top of the impressive 130% increase in the Microsoft stock price over the past five years.

Don’t Miss: Why the Apple Stock Price Is Rising Now

In fact, companies that consistently raise their dividends usually outperform the market. Another study by Ned Davis Research found that dividend stocks delivered triple the return of non-dividend stocks over a 28-year period.

Microsoft’s apparent commitment to raising its dividend annually is a powerful tailwind for MSFT stock.

And better still, it’s not the only one…

Why Microsoft Stock Is a Buy

Just because Microsoft has a healthy dividend doesn’t mean it’s evolved into a mere value stock.

It’s true that Microsoft’s Windows business has contracted along with the PC market, but the company is enjoying growth elsewhere.

The company continues to convert its Office business to a subscription model. That not only creates a steady revenue stream, but over time also generates more revenue than one-time sales of Office with a permanent license.

Microsoft’s Azure cloud business is its brightest spot – it grew 102% year over year in its most recent quarter and is giving Amazon.com Inc.’s (Nasdaq: AMZN) Amazon Web Services a run for its money.

And Microsoft is also pushing into new areas, such as augmented reality with the HoloLens as well as artificial intelligence.

So for the foreseeable future, Microsoft stock offers both growth and income – a double win for MSFT investors.

Next Up: The best dividend stocks raise their payouts year after year. The best of the best do so for 50 years in a row… like these “dividend kings”…

"If you held 100 shares of Microsoft stock for those five years, your annual dividend income would have nearly doubled from $200 to $390."

What am I doing wrong?

Nope. You're right. And the story has been updated with the correct figures. The MSFT dividend still doubled, but the dollar figures are lower as you pointed out.