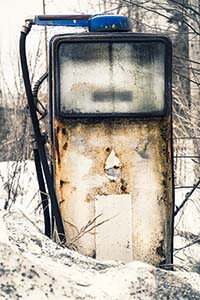 Though we're nearing the end of 2016, oil bankruptcies in the United States continue to crop up at a record pace…

That's according to a Sept. 12 report from Debtwire Analytics, a New York company that studies debt and predicts coming bankruptcies and restructuring.

The firm's not-so-great outlook is based on overwhelming evidence that the exploration and production (E&P) sector – a.k.a. the oil industry – is crumbling.

Have a look at these morose stats:

But there is some good news about the oil sector's decline, reported Debtwire.

It's failing more slowly – at least since June.

Of the 180 oil and gas companies Debtwire Analytics initially predicted in January would meet their demise in 2016, "only" 135 are now projected to go bankrupt in the near future.

That's at least in part because oil prices have recovered from their lows of around $26 in January, now hovering around $50 a barrel, helping some companies stabilize.

Still, there's one chief reason why the oil bankruptcy bout is noticeably waning, according to Debtwire's report.

And that reason doesn't exactly call for a party…