Access Your Profit Alerts
Sign Up for Money Morning and get your free report:
"The Best Stocks to Buy Now"
How to Buy Bitcoin
Twitter
Stocks: CLR, ETP, KMI, WLL

The controversy over the Dakota Access Pipeline poses a bigger threat to U.S. oil stocks than most investors realize.

That’s because the Dakota Access Pipeline fight has implications far beyond whether a single crude oil pipeline will be built or not. It now threatens current and future pipeline projects as well.

This isn’t just bad news for companies that build and operate pipelines, but for the oil producers that need a cheap, reliable way to transport their product to distant refineries. 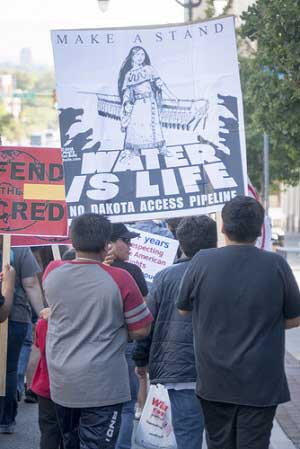 Lacking an efficient pipeline system to faraway refiners, the producers in the remote Bakken shale area have relied on shipping by rail and less practical pipelines through the Rocky Mountains already near their maximum carrying capacity.

The pipeline would carry Bakken oil from the North Dakota fields to terminals in Patoka, Ill.

Despite the project’s length, 99% of the Dakota Access Pipeline route crosses private land. But in the instances where the pipeline crosses federally regulated waterways or comes close to Native American lands, federal permits are required.

That’s the job the of the Army Corp of Engineers, which is required by law to consult with Native American tribes about activities that might affect sites of historical or cultural significance before granting any permits.

Don’t Miss: What the Energy "Experts" Don't Want You to Know About Oil

In the course of this process, one tribe, the Standing Rock Sioux, resisted the consultations with the Corps. The tribe said the pipeline would desecrate its ancestral lands and worried its path under the Missouri River threatened its water supply.

Though the two groups never resolved their differences, the Corps eventually concluded that construction of the Dakota Access Pipeline would not harm any Native American sites.

This past July, the Corps granted Energy Transfer Partners the last permits it needed.

That’s when the real trouble started…

At that point the tribe began to protest near a construction site. Soon other area tribes, as well as environmental groups, joined the protests.

The Standing Rock Sioux Tribe also filed for an injunction Aug. 4, suing the Corps and seeking a halt to construction. 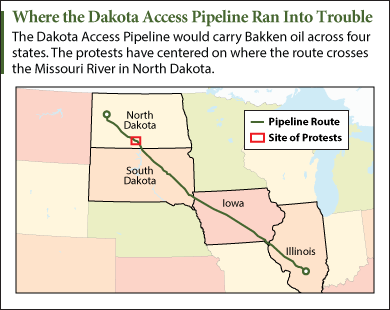 On Sept. 9, U.S. District Judge James Boasberg denied the tribe’s injunction, noting that the Corps had made every effort to accommodate the tribe’s concerns.

But then the Obama administration made a surprising intervention, reversing Judge Boasberg’s ruling and ordering a temporary halt to the pipeline’s construction where it crosses the Missouri River.

This unprecedented action – which happened just minutes after Judge Boasberg’s ruling was announced – puts virtually every similar project under a cloud.

"This could bog down or delay every single infrastructure project moving forward," industry consultant Brigham McCown, a former acting administrator for the Pipeline and Hazardous Materials Safety Administration, told the Associated Press. "I don't think they even realize the can of worms they've opened."

Here’s what’s at stake for the U.S. oil industry – and which oil stocks are in the crosshairs…

Why the Dakota Access Pipeline Fight Will Have a Ripple Effect

The Dakota Access Pipeline isn’t some wished-for project. With permits in hand, Energy Transfer Partners began construction in the spring. The project is 60% complete, with $1.6 billion spent to date.

The memo said the previous decisions by the Corps needed to be reconsidered because issues with the Standing Rock Sioux Tribe remained. More ominously, the memo suggests that existing policy regarding Native American input on infrastructure projects may need to change.

Craig Stevens, a spokesman for the Midwest Alliance for Infrastructure Now (MAIN), an energy-focused coalition of business interests, called the memo “deeply troubling” and warned of its long-term implications.

“Should the administration ultimately stop this construction, it would set a horrific precedent,” Steven said in a statement. “No sane American company would dare expend years of effort and billions of dollars weaving through an onerous regulatory process receiving all necessary permits and agreements, only to be faced with additional regulatory impediments and be shutdown halfway through completion of its project.”

The immediate impact of this decision is to make it harder to get shale oil out of the Bakken. The Dakota Access Pipeline was expected to start transporting oil in January, and it already had eager customers lined up.

Get Our Best Wealth-Building Ideas: Money Morning’s top 5 investment reports to grow your money like never before are right here – and they’re absolutely free. Read more…

With almost every business related to fossil fuels coming under fire these days, the threat to these oil stocks is only likely to grow.

It’s why President Obama rejected the Keystone pipeline, which would have brought Canadian tar sands oil to U.S. refineries.

Finding ways to block pipeline projects is simply one more way to undermine the fossil fuel industry. The Keystone pipeline crossed an international boundary, an issue that won’t apply to a lot of new pipeline projects.

But with the Dakota Access Pipeline, the issue is whether the project disturbs sites on ancestral Native American lands. Remember, we’re not talking about sites on reservation lands, but ancestral lands.

In their original complaint, the Standing Rock Sioux defined their ancestral lands as “wherever the buffalo roamed.”

As that definition includes most of the continental United States, it opens the door to a lot of mischief by liberal politicians dedicated to fighting climate change – and a standing threat to dozens of U.S. oil stocks.

Next Up: A Nearly Identical Keystone XL Pipeline Just Got Built – and No One Noticed