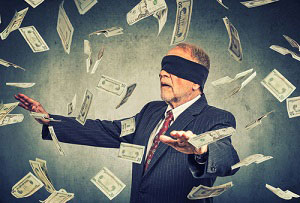 From bonds to gold, interest rate hikes affect the entire economy. Rate hikes even affect the price of your groceries.

That's why we're showing investors exactly how interest rates work, as well as the widespread impact they have on your money.

Because interest rates can impact a lot more than you think...

Interest rates provide lenders an incentive to lend out money.

Any lender has the risk of a borrower defaulting. So to bear that risk, interest rates provide the borrower a certain level of compensation and protection. The reward from lending money should outweigh the possibilities that borrowers default.

Trending: Save Yourself Before the Fed's Next Big Failure

The profit potential is so high that even if one borrower never makes any payments on the $10,000 loan, the lender still makes $495,000 from the 99 other borrowers who paid on time in full.

So what does this have to do with the Federal Reserve? Here's your answer...

The Fed oversees interest rates to promote a healthy economy. And the process is a balancing act for Fed officials.

You see, if interest rates are too high, people aren't able to borrow money. That means fewer people in the United States will spend money on homes, cars, or starting a business.

But low or near-zero interest rate levels can also have negative consequences.

For instance, low interest rates mean there is less incentive for people to keep their money in banks. That's because they are earning less on their deposited money, so they keep their money elsewhere. And with less money coming into banks, these banks have less money to loan.

But earning more money from your bank deposits is just one way interest rates impact your money. There are also numerous other ways your money is affected when U.S. interest rates are raised.

Here are the specific areas where U.S. interest rate hikes will affect your money...