A revised Bitcoin price prediction from Needham & Co. has raised the digital currency's estimated present value from $655 to $848.

The updated estimate, a 29% jump, comes just six months after Needham made its original Bitcoin price prediction in a report dated March 29.

While technically an analysis of the Bitcoin Investment Trust (OTCMKTS: GBTC), a fund for accredited investors, the report focuses heavily on the potential of Bitcoin.

"At the highest level, we continue to see value in Bitcoin as a 'digital gold' and as a payment network that is enabling a global, open, permissionless financial system," Bogart wrote in the Sept. 22 report. 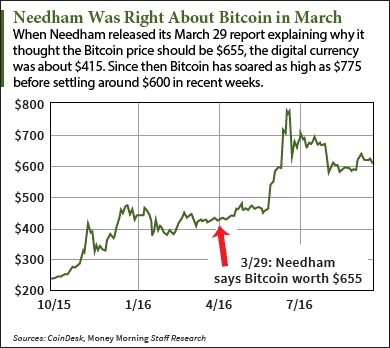 The price of Bitcoin continued to surge in the days after that, peaking at about $775. Bitcoin retreated after that, but was trading in the $650 range until the Bitfinex Bitcoin exchange security breach in early August.

In that incident, about $65 million worth of Bitcoin was stolen from Bitfinex customers. That knocked the Bitcoin price down to $550 before it recovered to $600, where it has remained since.

Nevertheless, Needham said it had noted Bitcoin's significant progress in several key areas. In fact, Needham was impressed at how quickly the Bitcoin price rebounded in the wake of the Bitfinex news, saying that the recovery at least in part was "due to greater confidence in Bitcoin's future."

Here's a deeper look at the other reasons Needham felt compelled to hike both its short-term and its long-term Bitcoin price predictions...

Needham's case for boosting its Bitcoin price prediction is based on three central ideas: that it is increasingly behaving like other investment classes; that adoption is accelerating; and that changes to the software itself will make it more useful.

Bitcoin has endured a lot of criticism for its flaws compared to conventional investments, particularly its high volatility and limited liquidity. But that's been changing, Needham found.

Where Bitcoin's volatility is about 3.3%, the Standard & Poor's Small Cap 600 is 2.6%. The report also notes that some tech stocks and oil prices are slightly more volatile than Bitcoin now.

Regarding liquidity, Bogart wrote that "Bitcoin's daily dollar volume roughly resembles that of a U.S. mid-cap security," even just using the top five Bitcoin exchanges where the digital currency can be traded for U.S. dollars.

Liquidity -- the ability to buy and sell an investment as needed -- is a vital consideration, as no one wants to be stuck in a position they cannot exit. Bogart noted that investing in Bitcoin even has some advantages in terms of liquidity, as the Bitcoin exchanges are open 24/7.

Another appealing aspect of Bitcoin is that its price moves have virtually no correlation with other investments. That makes it appealing as an investing hedge to guard against sudden price drops in other asset classes.

Regarding adoption, Bogart notes that transaction volume has had a compound annual growth rate (CAGR) of 224% since January of 2013, and it has more than tripled over the past year. The acceleration in transaction volume was a key factor in Needham's decision to raise its Bitcoin price prediction.

Trending: Why the Microsoft Dividend Is the Real Reason to Buy the Stock

In addition to the overall increase in adoption, Needham cited the increasing appeal of Bitcoin to emerging markets. Bitcoin offers very desirable features to these populations, including fast and easy cross-border transactions (for remittances) and a refuge from unreliable domestic currencies, such as we've seen in Venezuela.

Why the Bitcoin Price Will Quadruple from Here

Because Bitcoin is software, its code can be updated and improved to address problems as well as add new capabilities.

Needham sees these upcoming changes to the Bitcoin code as a major positive.

"We see a multitude of developments throughout the Bitcoin ecosystem that are poised to move from conceptual to real over the next 3-7 months - each of which could augment Bitcoin's features and functionality and, consequently, increase demand for Bitcoin," Bogart wrote.

Needham sees all these forces converging to drive up the price of Bitcoin over the next few years.

But the new report raises that estimate to $2,231 - a 272% increase over the current price of Bitcoin.

"Contrary to popular narrative, we see Bitcoin's fundamentals trending very favorably," Bogart wrote. "We find the outlook very encouraging, and we believe the short- to intermediate-term horizon is among the most exciting Bitcoin has seen."

Next Up: Why the First Bitcoin ETF Could Double the Price of Bitcoin

In fact, this information is extremely time-sensitive. Conditions won't stay this perfect for long.

What are the tax consequences of buying bitcoins?

Thanks for reading Money Morning. The IRS treats Bitcoin (and other digital currencies) as property for tax purposes. So you will owe tax on any gains you have at the time you sell your Bitcoin. This means, unfortunately, that you have to keep records of the prices you pay when you buy the Bitcoin as well as the price for which you sold them. That's no different than how stock gains are taxed, except your broker keeps the records for you and makes them available at tax time.