If Janet Yellen raises rates in December, it will likely be so the Fed can cut them again shortly thereafter.

Were it to hike rates, the central bank would cut its own feet off, too. The Fed's bond inventory is so massive, Goldman Sachs estimates it would take a $250 billion haircut on a 1% hike.

So I feel pretty confident that we won't see anything but a token increase – if that – anytime soon.

So, now more than ever, investors need to find a nice, secure source of yield among the slim pickings available; something with the wherewithal to hold up under uncertainty and change.

I'm going to show you the best one I know. And the best part is, its "secret ingredient" is more than powerful enough to overcome any interest rate hike, whether it comes from the Fed or the market.

The income is great, and you'll love the capital gains, too…

This Index Has Outperformed the Rest Since 2001 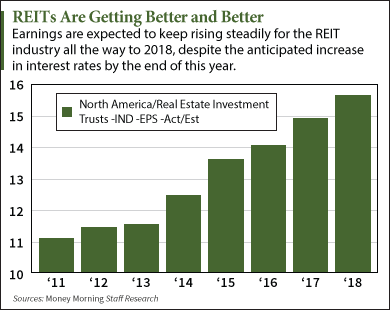 After the purge of the 2008-2009 financial crisis, real estate has made a forceful and convincing comeback. REITs in particular have done well, with the Dow Jones Equity REIT Index outperforming all other indices since 2001.

But despite an attractive performance, VNQ trades pretty rich at a price/earnings (P/E) ratio of 34 while yielding 3.33%.

Instead, I favor a more focused approach that targets the senior housing subsector of the REIT universe.

Senior housing is attractive because yes, we're all getting older. But more importantly, it's the growth in demand that provides the rationale for concentrating on this area.

According to the National Investment Center, "The most prominent demand trend is the growing senior population resulting from the baby boom."

It's forecast that the number of seniors above 75 will continue to swell over the next decade thanks to aging baby boomers. Meanwhile, improving life expectancy should contribute even further to the number of people joining this category.

That's more than enough to overcome the drag from any rate hike.

And in this category of senior-focused REITs, there's one name that stands out.

5652 Reads
The Two Best Penny Stocks to Buy This Week Offer 150% Upside
Here are two of the best penny stocks to buy right now, and the strategies I used to find them. This could be up to 154% potential gain for today's investor...