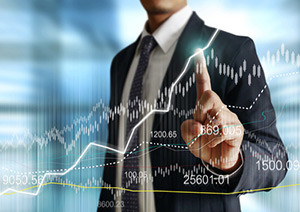 Our list for the best stocks to buy in October 2016 emphasizes quality companies that can survive a volatile market - because that's exactly what we have today.

After a rough start to the year, with the Dow Jones closing at its lowest level in two years on Feb. 11, all major indexes hit new all-time highs this summer - the Dow Jones and S&P 500 on Aug. 15 and the Nasdaq on Sept. 22.

Yet the fundamentals to support these lofty heights aren't there.

The employment picture isn't as rosy as the government would have us believe, and corporate earnings are likewise stuck in a rut. The third quarter was supposed to mark a return to growth. Yet according to FactSet, S&P 500 companies are on track to report negative earnings growth for the sixth quarter in a row.

Share prices have instead been artificially pumped up by reckless Federal Reserve monetary policy. And with the Fed's decision on Sept. 21 to hold rates near zero yet again, the upward march for stocks could continue - but we're due for a pullback before long.

That's no cause for concern, though - because the best stocks to buy right now are solid investments in any market. These are healthy companies that make products the world needs - and that never go out of style. They operate in growing sectors and have top-notch management teams at the helm.

Their stocks might temporarily dip during a pullback, but they'll recover and move higher. In fact, any downtrend would represent an ideal time for investors with a long view to pick up these quality shares at a discount.

Following are three of the best stocks to buy in October 2016 - and should markets falter, look to pick up additional shares on sale and hold for the long haul for outsized returns.

We've also included an easy strategy you can use to buy these stocks (or any stock, for that matter) at a price you want...

Urgent: This small-cap stock could double your money - and save a dying U.S. industry. Learn more...

Best Stocks to Buy No. 1: A "New Money" Stock to Make You "Old Money" Rich

Money Morning Executive Editor Bill Patalon got an inside view on the habits of the fabulously wealthy while working as a reporter in Rochester, N.Y. - home to a large number of "old money" families. He learned that it's not just preferential treatment owing to their high net worth that made these investors so wealthy - they actually invest differently than everybody else. They focus more on long-term results, and they gravitate toward long-term trends that offer the biggest profit potential.

The good news for those of us who aren't (yet) wealthy is that Patalon found a stock to buy now with the potential to nearly double in value in just a few years. He calls it "The Ultimate Long-Term 'Big Trend' Stock" - because while it's the clear leader in one tech sector, it's constantly making inroads in other tech subsectors that virtually guarantee continued growth.

For example, it's the perfect way to play the "next big thing" tech trend of virtual reality, a market that will generate $40.26 billion in revenue by 2020. Bill also considers this company a "digital infrastructure" play - and both tech and infrastructure are big trends that are the bailiwick of the wealthy.

Patalon's not alone in his favorable view of this stock - a top asset manager recently named it his favorite stock in Barron's. When Wall Street finally catches on, it will spur an "upgrade cycle" and send shares even higher - so grab this stock now, and get ready to buy even more if prices dip...

Best Stocks to Buy No. 2: This Defense Stock Is a Cybersecurity Play, Too

The second pick on our "best stocks to buy" list was recently recommended by not one, but two of our investing experts.

Money Morning Director of Tech & Venture Capital Research Michael A. Robinson says this company will be the biggest beneficiary of a massive defense sector "supercycle" as spending increases in both the United States and worldwide. It makes one of the best-selling missile defense systems in the world, with a price tag of between $2 million and $3 million per system. And its next-generation defense system is even more impressive, with an operational range of 120 miles - nearly five times the range of its predecessor.

And with tensions heating up in the South China Sea, the Middle East, Russia/Ukraine, and elsewhere, it's an environment defense stocks thrive in - and this one is the cream of the crop. Robinson says this company "is in the catbird seat in the defense sector" - and the time to get in is now.

Money Morning Chief Investment Strategist Keith Fitz-Gerald identified another reason why this is one of the best stocks to buy now. You see, the U.S. government has allocated a staggering $87 billion in its 2017 budget request to fix the country's outdated systems - like the Social Security Administration's 1980s-era benefits analysis programs and the Secret Service's mainframe computer that's equally in need of an upgrade.

This company sits at the very top of a short list of firms qualified to make these fixes. Unlike smaller tech companies, it's got the might and the security clearance necessary for the job. It's been plowing $3.5 billion into cybersecurity in the last 11 years - a move that's gone mostly unnoticed by markets.

Fitz-Gerald believes these efforts will propel this quality stock to (another) double...

Best Stocks to Buy No. 3: This "Legacy Wealth Stock" Is a Long-Term Profit Machine