The deeper you dig into the Wells Fargo scam, the more disturbing it becomes.

At first it seemed that Wells Fargo & Co. (NYSE: WFC) simply had some "bad egg" employees that created some 2 million phony customer accounts to meet their sales quotas.

Now, Wells said it took corrective action by firing about 5,300 employees (out of a workforce of about 265,000) over the five years the transgressions took place, from May 2011 through July 2015.

"The 1% that did it wrong, who we fired, terminated, in no way reflects our culture nor reflects the great work the other vast majority of the people do. That's a false narrative," Wells Fargo CEO John Stumpf told The Wall Street Journal earlier this month.

But take a deeper look, and you'll find that corruption at Wells Fargo ran far deeper than with its lower-tier employees…

You see, over a period of at least eight years Wells Fargo had developed a toxic work environment that left many employees in a no-win situation. In many ways, they're just as much victims of the Wells Fargo scam as the millions of customers that had Wells Fargo accounts opened without their knowledge or consent.

The problem was the bank's focus on "cross-selling" – convincing customers to buy multiple bank products. Not only does cross-selling lift profits, it binds customers more closely to the bank – making them less likely to switch to a competitor. 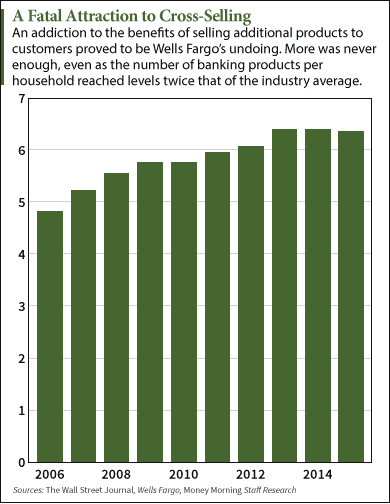 Emphasizing cross-selling was the idea of Stumpf's predecessor as CEO, Richard Kovacevich, who arrived with the bank's merger with Norwest Corp. in 1998. But it wasn't until Stumpf took over as CEO in 2007 that the strategy turned to an obsession.

On the surface, the bank's cross-selling initiative was wildly successful – the envy of the banking industry. By 2015, Wells Fargo had raised its number of products per customer household to 6.32 – about twice the industry average. And the company's ultimate goal was eight.

The Genesis of the Wells Fargo Scandal

Although exact numbers varied from branch to branch, Wells Fargo employees were given exceptionally high daily sales quotas. The Wall Street Journal reported this month that at one branch in Lincoln, Neb., workers were expected to open two new checking accounts per day as well as make eight other product sales.

Meeting the sales goals meant bonuses for both the worker and his manager (higher-level managers earned bigger bonuses). But missing goals wasn't tolerated. Those who failed to make their sales quotas during regular hours were asked to make calls after hours – off the clock. Other motivational tactics included public humiliation in conference calls and threats of termination.

Related: Why I Wasn't Surprised by Wells Fargo's Scam

"We were constantly told we would end up working for McDonald's," one-time Wells Fargo branch manager Rita Murillo told the Los Angeles Times in its 2013 exposé. "If we did not make the sales quotas … we had to stay for what felt like after-school detention, or report to a call session on Saturdays." 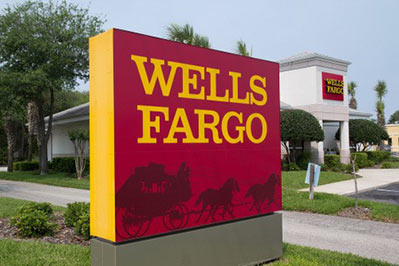 The relentless pressure from upper management left many employees with a choice between embracing unethical sales practices and giving up their jobs. Many tried their best to persuade customers to open unneeded accounts. Some begged friends and family.

A class-action lawsuit filed Sept. 22 by two former Wells Fargo employees said that "managers often tell employees to do whatever it takes to reach their quotas."

The suit describes several common "gaming" tactics, such as lying to customers about the need to open a savings account to avoid a fee on their checking account.

But often, even that wasn't enough…

Desperate to meet their quotas, many employees resorted to creating additional accounts without customers' knowledge, complete with forged signatures and fake email addresses. This, too, was often encouraged by management.

An internal investigation of the Wells Fargo scam found that staffers opened more than 1.5 million deposit accounts and more than 565,000 credit card accounts. About 14,000 of these accounts generated more than $400,000 in fees.

"All it takes is a chief sandbagging motivator to threaten the troops and they start firing into the dark night," said Money Morning Capital Wave Strategist Shah Gilani, who edits the free newsletter Wall Street Insights & Indictments.

Gilani added that regulators failed to catch on because "they're blind to 'small time' customer complaints that can be rationalized as mistakes that happen and don't add up to much financially.

There's no smoking bazookas, just the faint smell of misfired black powder, which isn't the same as nuclear material leaking across the bank."

Incredibly, the bad behavior also was explicitly forbidden by official Wells Fargo policy. But managers obsessed with making their own sales quotas were reluctant to flag misbehavior.

Wells Fargo even had a "whistleblower" hotline available for employees to report unethical practices.

How Wells Fargo Kept Its Corporate Head in the Sand

CEO Stumpf claimed in a congressional hearing last week that Wells Fargo employees are "encouraged to raise their hand if something is being asked of them that they think is not right, not consistent with our values and our culture."

But the opposite was true.

One man, Bill Bado, called the hotline three years ago and sent an email to human resources, following company protocol. Eight days later Bado was fired for being late for work.

A former Well Fargo human resources staffer told CNNMoney that the bank would target any employee who dared blow the whistle on unethical sales practices. Any pretense would do, no matter how flimsy.

Retaliation against whistleblowers is a clear violation of the law. But it was all part of a system designed to keep workers compliant and selling.

Even more troubling, this Wells Fargo scam isn't the only time the bank has betrayed customers to boost profits. Before it became obsessed with cross-selling quotas, WF was pushing its loan officers to sell subprime loans.

Beth Jacobson, one of the top sellers of subprime loans for Wells Fargo between 2003 and 2007, testified in a Baltimore court case in 2009 that some loan officers falsified applications so the borrower would qualify for the loan. She knew of reps who would "cut and paste" credit information from qualified borrowers into the applications of unqualified borrowers.

Given these alarming revelations, what should investors do about Wells Fargo stock?

The Wells Fargo Scam Makes This Company Much More Risky

Wells Fargo stock is down nearly 10% since the Sept. 9 revelations, although the stock is still up 144% over the past five years.

But the Wells Fargo scam leaves investors with some weighty decisions. The first is ethical. Do you want to own a bank that so easily betrays the trust of its customers?

The bank remains on solid footing, as the $185 million in fines represent a tiny portion of its $22.9 billion in annual income.  But Wells Fargo will face an extended period of increased regulatory scrutiny. The extraordinary breach of trust has damaged its reputation and will be a drag on business for the foreseeable future.

New revelations/investigations/penalties could take another bite out of Wells Fargo stock. At best it will trade sideways for a while.

The Bottom Line: Long-term investors who are sitting on fat gains should consider taking profits and re-allocating the capital.

Guest
That One Guy

As someone who worked for the "stagecoach" in retail banking as a Personal Banker (PB), I can tell you what wrecked it all. At Wells, and like most banks, you are under pressure to sell X amount of "solutions" every day. Every branch has their own unique goals based upon the local economy. Mine was 11 solutions per day, as was for other PBs at the same branch. At the end of every quarter, if you did not meet a sum total it was put on record. Three quarters in a row of under performing and you got the boot.… Read more »

Thank you for reading Money Morning, and thanks for sharing your story!

so what are you doing now? flipping burgers or making candles?

This is the real truth, yet it's only WFB that is investigated and all others are reaping the results. Truth be told, all are guilty, shareholders and financial sales persons such as YOU are just as responsible, yet you do not share the blame only call the kettle black, so take a look at yourself.
You all make mistakes, yet reap rewards without penalty.
Junetth

Where were the bank's auditors? All these new accounts without corresponding new revenue. Red flag (if you are looking for a flag).

Just reading this story really makes me sick because it's really indicative of too much of the corporate culture in general. In dealing with many businesses, I run into too much "strangulation"… the company squeezing the supplier and over selling to the customer. What happened to an honest days work for an honest days pay? Is this caused by too much paying the government in taxes and regulation and the other in the lack of ethics from our own upbringing? Me thinks so…..so sad. It doesn't end well…history says so.

The Wells Fargo Scandal is Bigger than Most People Realize The ongoing fake account scandal at Wells Fargo has finally brought attention to the overly aggressive sales practices at the bank. These practices have been an inherent part of the company culture for many years and were well-established when I joined the bank as an employee approximately six years ago. This has been going on for much longer than most people realized and extends throughout the entire retail bank. Unfortunately, what has been exposed to date is only the tip of the iceberg. For fear of losing my job, I… Read more »

And Obama and the main stream media tell people the economy is better and getting better.

So I am a Wells Fargo customer still (I'm not really sure why), and I was made to be a part of 3 of the scams written about in this article. What do the people like me, do now? I am still very, very upset with this bank. I was scammed out of almost $1,500.00! AND ~ I WANT IT BACK. Is there anything that I can do outside of hiring an attorney. I am a disabled woman of 61 years of age. I sure hope that I will hear from you so very soon! Regards and thank you for… Read more »