Is he right? Is the Fed political in any way, shape, or form?

Fed officials, the vast majority of political analysts, and "a wide range of independent observers," according to The New York Times, "roundly rejected" Mr. Trump's "accusation."

But the truth is, the Federal Reserve is absolutely, positively political. It's in its DNA.

I'll prove it to you…

The Fed Began as a Political Tool 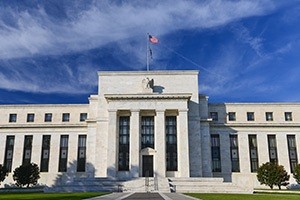 This isn't about Donald Trump being right. And it isn't about Hillary Clinton telling reporters on her campaign plane on Sept. 6, 2016, "You should not be commenting on Fed actions when you are either running for president or you are president. Words have consequences. Words move markets. Words can be misinterpreted."

This is just the bare naked truth about the Federal Reserve and how it operates.

Most people, including the majority of politicians in the United States, analysts, and journalists covering politics and the economy, and overseas observers, don't know what the Fed is.

They think as America's central bank it's a branch of the government. It isn't.

An example of the ignorance of even respected news outlets like The New York Times was front and center Tuesday.

In a Times article titled "Scant Evidence to Support Trump's Attacks on the Fed," author Binyamin Applebaum writes, "The Fed is not independent. It is an arm of the federal government, chartered by Congress to maximize employment and minimize inflation."

The Federal Reserve System is privately owned by shareholders. It is not an "arm" or branch of the U.S. government.

It was conceived in 1910 by a handful of rich and powerful men including Sen. Nelson Aldrich of Rhode Island, well known as an agent of John D. Rockefeller, to whom he was related through a family marriage; J.P. Morgan & Co. partner Henry Davison; Paul M. Warburg, the principal partner at Kuhn Loeb & Co.; an American agent of  Europe's richest, most powerful banking family, the Rothschilds; and National City Bank president Frank A. Vanderlip, at a clandestine meeting at the secluded Jekyll Island Club off the tip of South Georgia, partly owned by John Pierpont (J.P.) Morgan.

The senator and bankers designed the private central bank, which took three years to slide through Congress, to have the sole right to create Federal Reserve Notes (U.S. dollars), in other words, they own America's money supply, and to use their money to buy the government's debt whenever it was necessary to support federal operations and to support and backstop the big banks who were the shareholders in the new central bank.

The whole story of how the Fed was created, by who, for what purposes, and how it was greased to be twisted through Congress and institutionalized in law under the Federal Reserve Act of 1913 is one of America's dirtiest secrets. But the truth is out there.

As conceived, the Federal Reserve System is a political tool. It couldn't have come into being if political interests weren't satisfied.

The Fed Is Political – Whether It Acts or Not

of course one musn't forget the 'main' player : pres. woodrow wilson who was blackmailed into convincing congress the need for a central bank. a good idea really, but with 'unintended consequences'. and now another murky event is surfacing. apparently many usa bankers who opposed the idea of a central bank were invited to be the first ones to travel on the titanic. hmm..maybe there is more to the mystery of the sinking of that ship than has been explored, remembering of course that the core bankers of jekyll island could never stoop so low. could they?

Why is Congress scraid of Fed when they not part of AMERICA. The Public will take Control Away from the Cowards, when they get pushed into a Corner and I am going to ENJOY every minute.