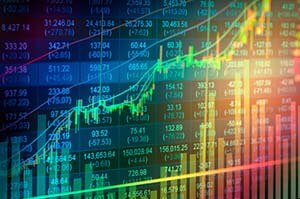 It was a weak start to the fourth quarter for stocks on Monday. The Dow slipped 54 points after a slew of weak economic data and investors weighed new concerns about the financial sector. The September Markit Manufacturing PMI fell to a three-month low of 51.5.

Shares of Deutsche Bank fell nearly 2% after the company moved to reassure investors and clients that the German bank isn't facing a liquidity problem. JPMorgan Chase & Co. (NYSE: JPM) CEO Jamie Dimon moved today to reassure investors that the German bank has enough capital on hand and will not face liquidity problems. Last week, German Chancellor Angela Merkel said that her nation cannot afford to bail out the embattled firm. Here's what's next for DB stock and just how dangerous the situation has become for the global financial system.

Signs of a stock market crash are starting to pile up, increasing the likelihood of a pullback happening before the calendar flips to 2017. Five signals in particular are flashing a warning to investors to prepare for a stock market crash. Let's take a look at them, right here…

Shares of TSLA stock rallied nearly 5% after the firm announced that third-quarter deliveries surged by 70% to 24,500 cars. The firm also said it's on track to deliver at least 50,000 vehicles in the second half of 2016.

Gold prices were falling on Monday after Britain announced a deadline to begin the process of exiting the European Union. British Prime Minister Theresa May's decision to set this deadline had very little influence on gold prices and other geopolitical hedges. Take a step back and you'll see that gold prices have been surging in 2016. Gold had its best first half to a year since 1980, and the yellow metal has rallied 25%. Where are gold prices heading next? Money Morning Resource Specialist Peter Krauth offers his insight, right here.

The price of crude oil today was shooting higher as traders continue to weigh the impact of OPEC's deal in Algeria. Crude prices pushed above $50 per barrel thanks to increased optimism over the deal and fading concerns about a global crude glut.

Money Morning Global Energy Strategist Dr. Kent Moors says that this deal isn't quite "there" just yet. Moors explains that OPEC nations must find a way to divide production among themselves and keep everyone happy. Then, there's one last challenge: getting Russia to take part in production limits. Here's what will happen next for oil prices.