The slide in the price of gold that began in early August continues on.

Gold prices continue to work off the excesses from the exceptionally strong first half of the year.  After being up an impressive 25% in just six months, some measure of rest was both deserved and healthy. 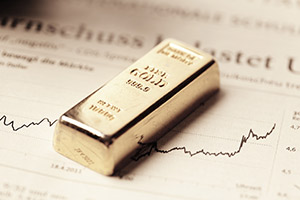 Who can complain? It was gold's best first half to a year since 1980.

With the September FOMC meeting behind us and no rate hike, gold's recent bounce appears temporary.

The effects of the first presidential debate were also muted. Meanwhile, the U.S. Dollar Index (DXY) managed to trade in a rather narrow range as it also appears to be in consolidation mode.

Let's look at the past week in gold, and look at what's next for the price of gold…

The price of gold ended the previous trading week on Friday, Sept. 23, on a strong note. Traders bid up the precious metal before heading into the weekend, likely in anticipation of the first presidential debate between Trump and Clinton. Gold prices closed out that week at $1,337.

On Monday morning, gold sold off in the early hours, then rebounded to open at $1,337. Gold traded mostly sideways throughout the day before closing at $1,338.

Then the debate happened. If you believe the markets, observers seem to think Clinton won.  And that took away some of gold's safe-haven appeal as Clinton is more of a known quantity.

Then on Thursday, sellers pushed gold lower still to $1,317 by 8:00 a.m., though buying stepped in to pull it up to $1,320 by the close. Rumors of the possible need for a bailout at Deutsche Bank likely provided that support.

While the price of gold pulled back continuously last week, here's what investors and traders can expect now…