Millions of investors are hunkered down over fears that the U.S. dollar will lose 30% to 50% of its value in the upcoming months, as a result of the Chinese yuan becoming a "reserve currency."

There's no reason to join them in the proverbial bunker.

In fact, quite the opposite is true – and that's why I want you to go on the offensive.

Starting with these three choices.

What a Reserve Currency Is (and Isn't) 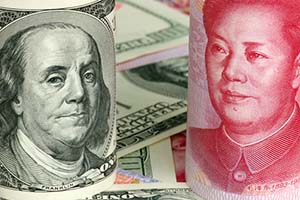 If there's one thing I've learned over the years, it's that financial predictions are a lot like belly-buttons… in that everybody has one. Most are highly provocative simply because that's how the pundits and tipsters grab your attention.

Very few actually come to fruition, which is why it's almost always more profitable to take the other side of the equation.

Case in point, take the Chinese yuan, or "renminbi" as it's also known, which means "people's money."

There's been no end of hype about how that nation's money would crater the U.S. dollar when it became a "reserve currency." And it's reached a crescendo over the past few months.

Admittedly, the arguments sound plausible. No doubt, that's why they're so scary.

The train of thought usually goes something like this… global trade has shifted, China's economy dominates world markets, they'll start a currency war as a means of ensuring that China stays on top… all of which culminates with some variation of the U.S. dollar will crash by 30% to 50% when everybody starts selling it.

When you dig deeper, though, the story just doesn't hold up. Frankly, neither do most of the "experts" I might add, but that's a story for another time – very few of them understand how global financial markets actually work.

Let's start with what it means to be a "reserve currency."

Technically speaking, a reserve currency is a currency held in huge quantities by central banks and governments as part of their foreign exchange reserves. Usually that's because the nation holding it does so much trade that they need it to pay liabilities or manage ongoing trade relationships.

Twenty-five hundred years ago it was the Greek drachma. Then there was the Roman denarius, the Byzantine solidus, and Arab dinar. The Middle Ages saw the rise of the Venitian ducat and the Florentine florin. By the mid-1800s, the world operated on the gold standard and more than 60% of global trade was invoiced in British pound sterling.

The U.S. dollar presently makes up 63% of total currency reserves, while the euro accounts for 21%. That's followed by the pound sterling, Japanese yen, and Canadian dollar with about 4%, 3%, and 2%, respectively.

The fear mongers say that's terrible because it means the dollar could shrink if everybody starts selling. They crow that 63% percent is a big number that's just got to fall.

Well, where? And to what level?

What the doomsayers do not understand about how real money works is that the world's traders cannot sell U.S. dollars en masse even if they want to because there is not another reserve currency capable of absorbing the liquidity.

Put another way… imagine the U.S. dollar is the water in a gallon milk jug and the euro is a tiny one-pint container. You cannot simply pour all your dollars into the pint-sized euro container because it's only so big. You've got to get another container…

Last Saturday it joined the International Monetary Fund's basket of reserve currencies known as Special Drawing Rights – SDRs for short – which determines which currencies countries can elect as the basis for their IMF loans.

Obviously the U.S. dollar didn't crater, and our financial markets are not a smoldering hole in the financial landscape. It's no coincidence that those same "experts" are eerily quiet at the moment.

Which brings me to how you can profit.

It sounds like a very good
way to hedge out positions

Keith is absolutely right that currency adjustments are gradual, so if anyone panics thinking the addition of the Yuan to the IMF's basket of currencies means an immediate fall of the U.S. dollar they could suffer losses making investments based on that premise. That however does not change the fact that it COULD lower the demand for U.S. dollars as reserves by foreign banks as SDR'S displace some of that demand. With the U.S. being the worlds largest debtor nation it stands to reason a rapidly deteriorating U.S. balance sheet will ultimately result in a lower value for the U.S.… Read more »