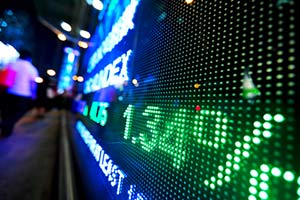 The Dow Jones Industrial Average fell on Thursday as investors prepare for Friday's key jobs report. The index's biggest drag today was Wal-Mart Stores Inc. (NYSE: WMT), which fell more than 2.6% after the retailer forecast weak earnings for the next two years.

The Dow Jones fell 12 points as investors weighed another round of economic data and monitored the approach of Hurricane Matthew. Last week, Americans seeking unemployment benefits nearly hit a 43-year low. The news comes a day before the Department of Labor announces the September unemployment rate. The report will provide a strong influence on the Federal Reserve's pending decision on interest rates in the months ahead.

Twitter Inc. (NYSE: TWTR) is in trouble again. Shares had been rallying in recent trading sessions thanks to rumors that suitors were lining up to bid for the microblogging network. However, that speculation appears to have been premature. TWTR stock fell more than 18% after Re/code announced that both Walt Disney Co. (NYSE: DIS) and Alphabet Inc.'s (Nasdaq: GOOGL) Google were unlikely to make any bid for the firm. That leaves Salesforce.com Inc. (NYSE: CRM), which saw shares crater on Wednesday after CEO Marc Benioff talked about a deal. Mizuho analysts warned that a Twitter deal could reduce Salesforce's stock value by as much as 25%. Here's the latest on the TWTR deal and why it looks unlikely.

The price of crude oil today was pushing back above $50 per barrel for the first time since June. Last week's announcement by OPEC that it will cap crude production in November has established a floor for prices. Money Morning Global Energy Strategist Dr. Kent Moors has called OPEC's deal a game-changer. However, there is much work to do for the global oil cartel. Moors explains what's next for oil prices and what investors must know about global production.

But the big story today was at Deutsche Bank AG (USA) (NYSE: DB). The company announced plans to slash more than 1,000 jobs in Germany as part of a larger restructuring plan. The firm will let go of 9,000 employees around the world as the fallout continues from its ongoing liquidity problems. The firm is expected to settle with the Department of Justice in the coming weeks for its peddling of mortgage-backed securities during the financial crisis.