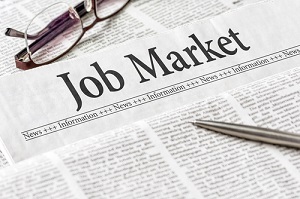 This morning, the Dow Jones Industrial Average was falling as investors eyed a lackluster September jobs report. Last month, the economy created 156,000 new jobs, well short of the 176,000 positions that economists had anticipated.

On Thursday, the Dow fell 12 points as investors weighed another round of economic data and monitored the approach of Hurricane Matthew. Last week, Americans seeking unemployment benefits nearly hit a 43-year low.

Right now, investors have many ways to make money. But one of the most interesting and exciting is the method developed by Tom Gentile, America's No. 1 trader. With Hurricane Matthew coming ashore, Tom lays out why trading has become so profitable for investors. Be sure to check out his latest insight on the markets, right here.

The Dow Jones Industrial Average projected a 32-point decline this morning as investors weighed the September jobs report and prepared for a busy day of speeches from members of the Federal Reserve. With four speakers set to offer insight on the economy's health, investors are expecting that the central bank will raise interest rates in December.

The British pound lost 10% of its value in just a few minutes this morning in what traders are calling a "flash crash." The sell-off fueled by computer orders has the currency on pace for its worst week since 2009 and has sent the sterling to a 31-year low. Investors are increasingly concerned that Britain will have a "hard" exit from the European Union. That would mean the country would surrender its access to the European Union market and choose instead to control its own borders. The consequences could include trade restrictions and the disruption of capital flows.

Oil prices have pushed back above $50 per barrel for the first time since June. Last week's announcement by OPEC that it will cap crude production in November has established a floor for prices. Money Morning Global Energy Strategist Dr. Kent Moors has called OPEC's deal a game-changer. However, there is much work to do for the global oil cartel. Moors explains what's next for oil prices and what investors must know about global production.

The WTI crude oil price today was flat at $50.46 per barrel. The Brent crude oil price fell 0.1% to $52.47. Keep an eye on prices later this afternoon when Baker Hughes Inc. (NYSE: BHI) reports the weekly rig count, which offers insight into the health of U.S. crude production.

The big story this morning is at Deutsche Bank AG (USA) (NYSE: DB). The stock has rallied more than 18% this week after shares hit a 30-year low. Investors have been piling back into the German bank after politicians and Wall Street leaders reassured the markets that the company wasn't having a liquidity crisis. But we argue that investors shouldn't buy into this false rally. Here's the truth about the Deutsche stock price and where this company is heading next.