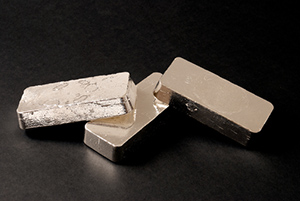 The price of silver per ounce has been extremely volatile today (Friday), and it's now rising following weaker than expected jobs data from the U.S. Labor Department.

Silver prices were down steeply this morning, off as much as 2.5% intraday to a low of $17.18 in early trading. But the price of silver per ounce staged a sharp turnaround just after Wall Street's opening bell. Silver prices were higher by 1.5%, or $0.26, at $17.65 after the bell.

The spike in the price of silver happened after a muted report about U.S. job growth in September.

The labor participation rate was also disappointing. It now remains at a 40-year low. The rate, which reflects the number of discouraged workers that have dropped out of the labor market, rose by 0.1% in September to 62.9%.

The lackluster jobs report gives the U.S. Federal Reserve a reason to maintain its lower for longer interest rate stance. That's bullish for and supportive of silver prices.

Worries of a Fed rate hike have weighed on silver prices the last two months. Since late August, policymakers' comments on the likelihood of a rate increase have grown increasingly hawkish. As a result, the price of silver per ounce has come under pressure.

In fact, silver prices are down 12.7% over the last three months.

Shares in the popular iShares Silver Trust ETF (NYSE Arca: SLV) are down 8.5% over the last five days. The Global X Silver Miners (NYSE Arca: SIL) are off 10.31%.

Greetings from Nonthaburi, Thailand,
Where in Nonthaburi, could I but silver one ounce bars. Gold shops Ifound, but Silver shops, not yet.