At least 60 million people tuned in to the second presidential debate yesterday.

But what I really want to see is what they do after.

That's because I've been watching a pattern that forms during election years, and it's driven one industry in particular to all-time highs 17 months in a row.

This pattern doesn't care about who's running or what their chances of winning are, either...

It only cares about the election itself - and how people are responding.

And with just 28 days left until Election Day, it's only getting stronger.

So now's your best time to profit.

It's Time to Buy Gun Stocks... and This Is Where You Start

It may come as no surprise to you that in most election years, gun sales soar. Take the 2008 election, for instance, where more guns were sold shortly following Obama's re-election than were sold over nearly the seven years prior.

And that momentum has only picked up...

In fact, gun sales have crushed every single monthly record this year, with September becoming the 17th consecutive month of record gun sales, which increased by 27%.

And this increase in sales of firearms and accessories helps ammunition and gun manufacturers, like Smith & Wesson Holding Corp. (Nasdaq: SWHC).

Both times SWHC ran out of steam in the price area of $30. 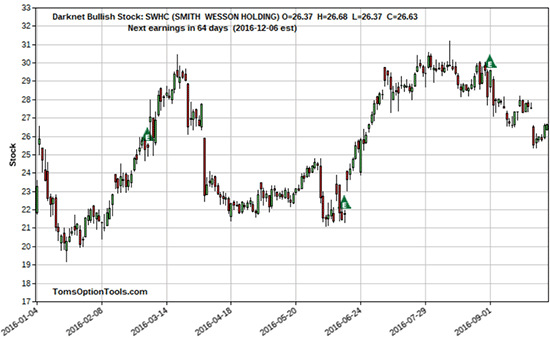 SWHC reported earnings on Sept. 1, 2016, beating both earnings-per-share (EPS) and revenue expectations. It reported a $0.62 EPS (nearly 17% higher than consensus estimates), and its revenue grew 40.1% on year-over-year basis.

And as you can see below, it looks like SWHC has been in a post-earnings retracement where traders are "selling the news."