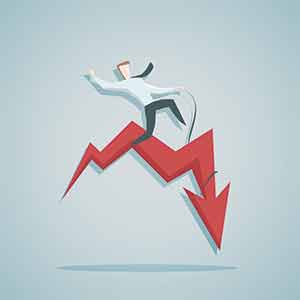 We've put together a list of those companies as a warning for investors. But just because a stock is tanking, doesn't mean investors can't still profit...

And for the first time ever, we're sharing Lewitt's investment strategy with readers. But first, let's look at our list of the five worst-performing S&P 500 stocks in 2016...

Despite the big letdown from this study, Alexion still is a solid company. While it has a lot of long-term debt ($3.2 billion as of last year), its debt pile is nowhere near that of companies like Valeant or Endo. Its sales also topped out at $2.4 billion last year - the highest ever for the company.

As of June 2016, the company reports a net income of $698.2 million with nearly $3.9 billion in sales, according to FactSet. With those kinds of numbers, FSLR's performance this year doesn't seem warranted. But there's more to the story...

Continue reading to see the worst-performing stock in the S&P 500. This company is loaded with debt, and its future looks bleak...