For the first time in history, dollar-pound parity could become a reality. In other words, the pound could soon be worth as much as the dollar.

So if you're thinking about taking a trip to Great Britain, now would be a good time...

Over the past 10 days, Britain's currency has hit a new low against the dollar, falling 5.4% to $1.22 on Tuesday intraday. This is the first time the pound has depreciated this much since June 1985. 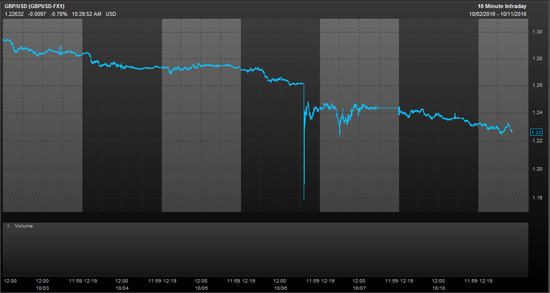 Click to enlarge. A note: That big dip you’re seeing was a “flash crash” on Oct. 6, which many believed resulted from a lack of market liquidity. That means large “bid-ask” spreads, with too many people trying to sell the pound at once. Source: FactSet

A number of options traders are betting on dollar-pound parity, according to Bloomberg. Already, several traders have booked long-term puts with a strike price of 1. That means these traders will profit if the dollar becomes more valuable than the pound.

Over the past six months, the cost to hedge against a sudden fall in the pound has widened by 2%, Bloomberg reports. In other words, there's an increased cost associated with betting against the pound. And that means more traders are expecting a drop.

So why is the pound plummeting in the first place? As it turns out, the source of the currency's woes started back on a single day: June 23.

Why Dollar-Pound Parity Is a Possibility

The pound's decline can be traced back to a single source: Brexit.

After the "leavers" won the United Kingdom referendum to exit the European Union, currency traders quickly sold off the pound. On June 24 - just a day after the Brexit referendum - the pound fell 5.5%, and it's been on a downward trajectory ever since. 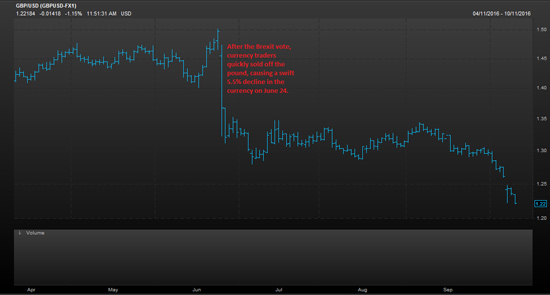 In fact, the pound fell 16% between June 24 and Oct. 11. And this past week's decline in the pound came from a new development in the Brexit narrative...

On Oct. 2, British Prime Minister Theresa May said she's committed to the UK's departure from the EU. She set a definitive date for triggering Article 50 of the EU's terms, which will begin the process of Brexit before the end of March 2017.

Related: Why the Brexit Vote Isn't Doomsday for the UK

What's more, she's signaled that the UK won't bend for any special interests. Many within the financial services industry expressed concern that a full-fledged Brexit without any negotiations would hurt UK jobs, causing them to move elsewhere in Europe. May's resolve shows she's committed to a so-called hard Brexit, or one without any special deals.

As the trigger date for Article 50 nears, investors can expect the pound to continue its decline. Interestingly enough, the pound's fall may actually serve as a buffer for the UK's transition. A lower currency can help increase exports and trade for a country, which contributes to its gross domestic product.

The Bottom Line: The pound will continue to depreciate against the dollar in the coming months, up until the UK invokes Article 50 before the end of March 2017. And while dollar-pound parity isn't guaranteed, it is an increasing likelihood as currency traders reduce exposure to the pound.

Thanks a lot for the indepth analysis and guide.