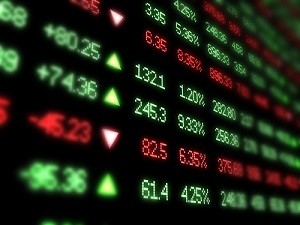 The Dow Jones Industrial Average pushed higher as traders dissected an update from the Federal Reserve.

The Dow Jones gained 15 points as traders eyed several speeches from Federal Reserve officials and they digested the release of minutes from the central bank's September meeting. According to the meeting minutes, the Federal Reserve took a hawkish slant during last month's meeting. Several officials worry that the Fed must raise rates soon in order to stave off a recession.

There's just one big problem with rate hikes that no one seems to be discussing in the mainstream press. When rates increase, so do the debt burdens taken on from companies that have gobbled up cheap money during the Era of the Federal Reserve. When the central bank increases rates, they'll light the fuse of a massive "debt bomb" the could trigger disaster. We dug into the numbers, and we've found seven companies that are poised for lots of pain when rates go higher. You don't want to miss this stunning report.

It was another big day for the alternative transportation sector. This morning, General Motors Co. (NYSE: GM) announced it had invested in a Chinese car-sharing company called Yi Wei Xing Technology Co. GM declined to announce the size of the investment, but it's the latest sign that industry giants are transitioning to newer technologies to compete against upstart firms.

The price of crude oil today fell thanks to a surging U.S. dollar and speculation on the outlook for OPEC in the wake of its production cap deal. The U.S. Dollar Index is near a seven-month high as traders eye the possibility of pound-dollar parity in 2017. Traders have been concerned about the intentions of OPEC producers Iran and Saudi Arabia and the feasibility of the cuts in the near future. Money Morning Global Energy Strategist Dr. Kent Moors says that Saudi Arabia is playing games with this production deal and that all eyes will be on the next OPEC meeting on Nov. 30 at its Secretariat in Vienna. Here's Moors' latest insight.

Are we facing another major customer scandal at a significant U.S. institution? Shares of Comcast Corp. (Nasdaq: CMCSA) were flat today despite news that the cable giant will pay the largest fine ever levied by the Federal Communications Commission to a company in their business. The firm will pay $2.3 million and will face increased oversight from the agency. The crime? The company charged customers for services and equipment that they didn't request.

But the big story today was happening in the smartphone industry. Samsung Electronics Co. Ltd. (OTCMKTS: SSNLF) slashed its operating profit forecast in the third quarter by a stunning 33%. The company continues to reel from a massive recall and production halt for its Galaxy Note 7 device, which had been starting fires. The news helps its primary competitor Apple Inc. (Nasdaq: AAPL). AAPL stock has rallied to its longest streak of daily gains since February 2015. Analysts expect that Samsung's problems will help bolster sales of Apple's iPhone 7 and iPhone 7 Plus. Here at Money Morning, we've been bullish on Apple for a long time. In fact, we put together an Apple Stock Investing Guide that offers a deep dive into who this is one of the best stocks to own.