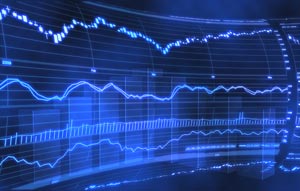 The Dow Jones Industrial Average pushed to a three-week low thanks to weakness in Chinese exports and rising expectations that the Federal Reserve will raise interest rates in December.

According to CME Group's FedWatch Tool, the probability of a rate hike in December rose to 70%. The CBOE Volatility Index (VIX) – widely considered the market's fear gauge – rallied by as much as 13% on the day. Investors who are afraid of a possible bear market should read the latest insight from Money Morning Chief Investment Strategist Keith Fitz-Gerald. This afternoon, Fitz-Gerald explained the tools you can use to profit in any market situation.

The Dow Jones fell 45 points on surprise news that China's exports slumped by 10% in September, while imports declined.

Don't Miss: How to Profit from the Yuan's "Big League" Debut

The price of crude oil today pushed higher despite a rising U.S. dollar and news that OPEC production had surged to its highest level in eight years. The uptick also happened after the U.S. Energy Information Administration announced its official crude inventory report and marked an end to five straight weeks of inventory declines. The EIA reported a 4.9-million-barrel increase to U.S. inventory levels, topping consensus expectations of a 300,000-barrel gain. What could lead to a price increase on news of higher supply? The EIA reported a large decline in distillates – like heating oil and diesel fuel – and gasoline.

But the big story today was back at Wells Fargo & Co. (NYSE: WFC). The markets are watching the embattled firm after its CEO John Stumpf stepped down last night. The executive has been pressured for weeks to resign due to the firm's massive account scam. The new leader is president and COO Timothy Sloan. Despite the change of guard, the problems plaguing the company's culture still remain. Here's Money Morning Capital Wave Strategist Shah Gilani weighing in on the crisis, right here.