If Hillary Clinton gets elected to the Oval Office, many believe she’ll advocate for a single-payer healthcare system.

That’s because Obamacare has been under increasing scrutiny — even across party lines. The average Obamacare premium for 2016 plans rose about 9% from January of last year, according 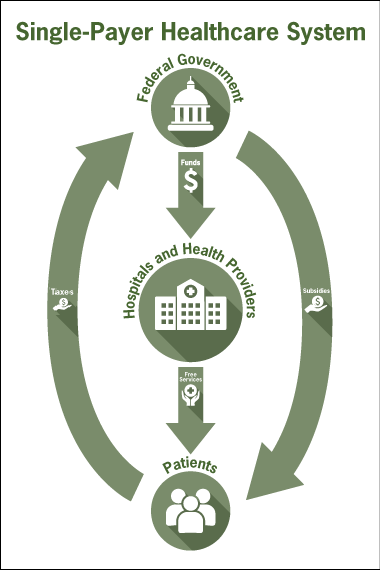 to a report from the Department of Health and Human Services. And for some states, premium increases for certain plans were as high as 40%.

Don’t Miss: Eight Times the Government Was Warned About Obamacare Fraud – and Did Nothing

On the Dem side, the favored alternative is a move to a single-payer healthcare system. Indeed, at a rally on Oct. 4, former U.S. President Bill Clinton called Obamacare “the craziest thing in the world” and seemed to support a single-payer system.

“Here’s the simplest thing,” he said. “Figure out an affordable rate and let people use that – something that won’t undermine your quality of life, won’t interfere with your ability to make expenses, won’t interfere with your ability to save money for your kid’s college education. And let people buy in to Medicare or Medicaid.”

A Gallup poll in May showed that 58% of respondents wanted to replace Obamacare with a universal healthcare system. But a more recent AP poll underscored a problem with those results: Most Americans don’t fully understand how a single-payer system actually operates…

What Is Single-Payer Healthcare?

Single-payer healthcare, also called “universal healthcare,” is a system where a public agency organizes and funds healthcare for all citizens. In the U.S.’ case, that public agency would most likely be the federal government.

Fifteen of 33 developed countries already use a single-payer system, including:

Under a single-payer system, all legal residents of the United States would be granted medical services for no cost. That means doctor visits, hospitalizations, long-term care, preventative care, prenatal care, etc., would all be “free.” It would also eliminate the need for private insurers.

Of course, as the saying goes, nothing in life is free…

Advocates for a single-payer system say it can be funded by replacing inefficiencies in market-driven healthcare systems, like “greedy” insurance companies. They say that premiums, co-pays, and deductibles would disappear, and that 95% of households would save money, according to the Physicians for a National Health Program (PNHP).

How a Single-Payer Healthcare System Will Affect Your Taxes

A single-payer system has a big trade-off. If Americans want free healthcare, they’ll be picking up the tab through higher taxes.

For proof, all we have to do is look at one of our closest neighbors: Canada. A report by the Fraser Institute found that the average Canadian family paid an additional $11,735 in taxes annually for their single-payer healthcare system. The report also found that the cost of Canadian healthcare is rising 1.6 times faster than the average income.

As for the United States, former presidential candidate Bernie Sanders’ single-payer plan is a great example of what kind of tax increases Americans could expect.

Under Sanders’ plan, there would be a 6.2% income-based healthcare premium paid by employers. While that wouldn’t affect your taxes directly, there’s a good chance that cost could be kicked back to employees in the form of lower take-home pay.

Next, he advocates for a 2.2% income-based premium paid by households. Families that make under $28,800 a year wouldn’t have to pay this tax.

But the big doozy for taxpayers under Sanders’ plan are new progressive income tax rates. That entails a:

In addition to this progressive tax and the income-based tax, Sanders also wants to tax capital gains and dividends the same as income from work…

That means Sanders’ plan would hurt investors — especially those who mostly live off income from their investments.

In addition, Americans that make over $250,000 per year would no longer be able to save money through tax deductions, including personal and itemized exemptions. Sanders says these restrictions could raise $15 billion per year.

Lastly, in a new estate tax, Sander’s plan would slap an additional progressive tax on the wealthiest 0.3% of Americans who inherit over $3.5 million.

As you can see, “free” healthcare is far from free. And while Sanders’ plan shifts more taxation and penalties onto upper-middle and upper-class Americans, middle- and low-income families still pick up a portion of the cost.

And there’s no guarantee a single-payer plan under Clinton would be more equitable in terms of taxation. So far, Clinton has released her broad healthcare plans on her website. In particular, she says she wants to “expand the Affordable Care Act.” Many think that could ultimately entail a single-payer system. If Democrats take control of Congress after midterm elections on Nov. 8, such a plan would be more easily passable…

Up Next: Turbocharge your investing returns with our top 5 money-making investment reports. Get them now – they’re absolutely free. Click here…

Still a take away from the working class and a give away to those who do not work but are able to work. This will destroy the social security program for those who paid into all their lives. Retirement will not be possible for any working class American and most likely prescriptions will not be covered or dental care and vision coverage. Take from those who have and give to those who do not. Welfare will increase 1000% because there will be no incentive to work for a good life in your old age. It's all basically just a program that poor America will be the people the benefit and the enslaved working class will be providing Every thing for they worked for to give them them as much as some one who worked for everything they have.
That is.communism to the core.
Good bye to the American dream it is dead.

"Single Payer" is more correctly described as "Government Controlled Health Care". And as the controller of the payments, that means complete control of health care by Washington. Washington would decide how much doctors would be paid, how much drugs would cost, ( and consequently how much money was available for research on new drugs) how much hospitals would be reimbursed. How much Medicare would reimburse doctors and hospitals etc. And if you can't understand what the terrible repercussions of all of this would be , you are terribly naive. Improvements to how health care is delivered and paid for- absolutely. Turning over all aspects of health care to politicians and bureaucrats- a disaster in the making.