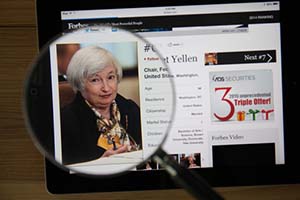 The Dow Jones Industrial Average today is climbing ahead of key Federal Reserve speeches, with the finale coming from Janet Yellen.

Investors are also preparing for a fresh round of quarterly earnings reports from several leading investment firms and commercial banks.

Central banks around the globe are creating immense threats that are staring every investor in the eye, but too many are choosing to ignore them. When the dust settles, only one currency will be worth owning, and there has never been a better time to own it than right now.

Read all about this global currencym and start profiting - and protecting yourself - right away.

On Thursday, the Dow fell 45 points to a three-week low on surprise news that China's exports slumped by 10% in September and expectations increased for a December rate hike.

Now let's look at the most important market events and stocks to watch today, plus your economic calendar, for Oct. 14, 2016.

Trending: The 2016 Presidential Election Is Finally Moving Markets, So Do This

Oil prices were rising on Friday. This was caused by a reversal from earlier concerns that cuts proposed by OPEC members will not be able to totally abate the supply glut that has grown over the last two years in the global markets. Sentiment changed overnight as markets reacted to the U.S. Energy Information Administration announcement that crude distillates and gasoline inventories plunged last week. The WTI crude oil price today added 1.1%, while the Brent crude oil price gained 0.7%.

But the big story in pre-market hours is the earnings report from Wells Fargo & Co. (NYSE: WFC). The company is in flux this week after the resignation of its CEO John Stumpf, who has been replaced by COO Timothy Sloan. This morning, shares added 1% before the company reports earnings. Wall Street anticipates the firm will report earnings per share (EPS) of $1.05 on top of $22.0 billion in revenue. Despite the change of guard, the problems plaguing the company's culture still remain. Money Morning Capital Wave Strategist Shah Gilani weighs in on the problems with Wells Fargo, right here.