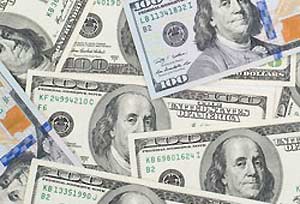 This morning, the Dow Jones Industrial Average fell as the U.S. dollar hit a seven-month high against a basket of currencies.

The increasing strength of the greenback is seen as further evidence that the Federal Reserve will increase rates in December.

Bond prices ticked to their highest levels since June, prompting stocks to slide before the bell on Monday.

This morning, expect a lot of chatter about the WikiLeaks dump of Hillary Clinton's private speeches to Goldman Sachs Group Inc. (NYSE: GS) and other financial institutions. The email leak indicates that Clinton has two sets of positions when it comes to issues on finance and the economy: a private and a public one.

Her private stance is that laws like the Dodd-Frank Act were passed for "political reasons" to appease constituents.

On Friday, the Dow rallied after Fed Chair Janet Yellen made no statements on the timing of the next interest rate hike in a speech featuring 25 uses of the word "recession."

Now let's look at the most important market events and stocks to watch today, plus your economic calendar, for Oct. 17, 2016.

The Dow Jones Industrial Average today projected a 20-point decline as investors eyed a fresh round of earnings reports and questioned the health of the global economy. With earnings in focus, one company that Money Morning recommends investors watch today is Netflix Inc. (Nasdaq: NFLX). We've been bullish on the streaming giant for months. Here's where we see the stock heading next and how you can profit.

Trending: How to Insure Your Stocks… and Make the Stock Market Pay for It

Oil prices were on the rise this morning as investors eyed the rising dollar and speculated the feasibility of OPEC's global production deal. The WTI crude oil price today added 0.4%, while the Brent crude oil price gained 0.6%.

But the big story in pre-market hours is happening at Deutsche Bank AG (USA) (NYSE: DB). The company has been under pressure from the Department of Justice for misleading investors on mortgage-backed securities. But over the week, reports broke that the federal agency is pushing the German bank to sell off its U.S.-based assets as part of a deal.