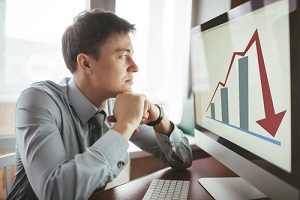 When there's a stock market drop, many investors feel like selling is their only option.

They see their investments losing money - so they panic. And it's only natural for people to want to stop their losses.

But rather than surrendering to the markets during a sell-off, Money Morning Chief Investment Strategist Keith Fitz-Gerald shows investors an alternative strategy. [Editor's Note: Click here to receive free money-making ideas from our investing gurus, like Fitz-Gerald.]

With his approach, investors can actually turn a stock market drop into gains.

Fitz-Gerald's strategy is used by some of the most legendary traders in the world, including George Soros and Paul Tudor Jones. Both traders manage billions of dollars in capital.

Plus, Fitz-Gerald's strategy can be implemented into your portfolio easily. You too can profit even when the markets are falling.

Here's how to profit during a stock market drop...

How to Make Money During a Stock Market Drop

On Aug. 29, traders all over the world were glued to their computer screens or TVs.

Federal Reserve Chair Janet Yellen was making one of the most important speeches of her career in Jackson Hole, Wyo. The topic was monetary policy.

She chose her words carefully, knowing they'd have the power to move markets.

Meanwhile, two multibillionaires were also tracking Yellen's every word, looking for hawkish indicators. That's because ahead of her speech, they had taken record put positions in the S&P 500. George Soros' management fund had doubled the amount of S&P 500 puts it owns to $839 million, according to Fitz-Gerald. At the same time, Paul Tudor Jones' management fund also more than doubled its S&P 500 puts to $1.7 billion, Fitz-Gerald found.

Both Soros and Jones were setting up for a stock market drop. They speculated that Yellen would argue for a September rate hike - and that the markets wouldn't like it.

While Yellen did have a hawkish tone in her speech, she stopped short of calling for a rate hike in September. And that stock market drop never came...

But the tactics both billionaire traders used demonstrate the importance of hedging. If there had been a big stock market drop after Yellen's speech, both of them would have made a fortune.

You see, S&P 500 put options are just one way to profit when markets fall. And Soros' and Jones' bets, while large, made up just a small portion of their overall investing capital. According to Fitz-Gerald, placing only small portions of your capital into any one investment is "part of a disciplined investment strategy."

Normally, Fitz-Gerald does not recommend following the moves of billionaires. They have a completely different risk tolerance, as well as a level of access retail investors like us can't achieve. But you can use similar strategies when the time is right to profit from a stock market drop, according to Fitz-Gerald.

Let's take a closer look at this strategy now...

The Easiest Strategy to Profit During a Stock Market Drop