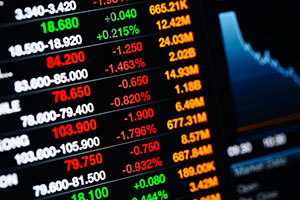 The Dow Jones Industrial Average surged on Tuesday afternoon thanks to another round of positive earnings reports and increased expectations that markets will continue to rally after the U.S. election.

The Dow Jones rallied 75 points on Tuesday as investors weighed positive earnings results and speculated on the timing of the next interest rate hike. The S&P 500 and the Nasdaq had their best week in a month due to increased optimism on this quarter's earnings expectations.

Life is getting more expensive in the United States. In September, the U.S. Consumer Price Index (CPI) increased at the fastest pace in five months. The news has many economists anticipating that inflation levels are approaching the Federal Reserve's target goal. According to CME FedWatch, the probability of a rate hike in December currently sits north of 60%.

Meanwhile, investors continue to monitor the financial sector after Goldman Sachs Group Inc. (NYSE: GS) reported a 58% jump in trading revenue last quarter. The investment bank reported earnings per share (EPS) of $4.88 on top of $8.17 billion in revenue. Wall Street analysts expected an EPS of $3.86 on top of $7.57 billion in revenue. While everyone is high-fiving about the financial sector's strong performance in recent months, another big story is brewing that everyone seems to have ignored. There is a crisis developing in the consumer debt markets… and it all comes back to one terrible phrase from the 2009 financial crisis: subprime lending.

The price of crude oil today gained as a rising dollar offset optimism regarding production cuts proposed by the Organization of the Petroleum Exporting Countries (OPEC).

This morning, OPEC energy chief Mohammad Barkindo said he will meet with Russia to discuss global oil production limits and efforts to support crude prices. Russia, a non-member of OPEC, is the world's second-largest crude producer and has been hammered by the low oil price environment. Bolstering prices would be an important step to help the country stabilize its economy.

But the big story today was the new discoveries inside the hacked emails of Hillary Clinton's campaign.

Clinton ultimately chose Sen. Tim Kaine (D-VA). The revelation is an interesting plot twist in the 2016 election year and offers a glimpse into Clinton's business connections.

Up Next: Learn How to Profit from a Stock Market Drop