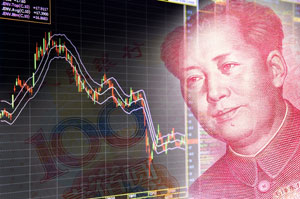 We've been warning readers all year about the impact China's ballooning debt could have on global markets.

Data released today (Tuesday) by the People's Bank of China shows "total social financing" - the broadest measure of credit lending from both traditional and non-traditional sources - surged last month. The figure rose by 1.72 trillion yuan. That was well above the expected increase of 1.39 trillion yuan.

That was also well above the 1.47 trillion yuan level in August.

New bank lending also surpassed forecasts, coming in at 1.22 trillion yuan. That was higher than the 1 trillion yuan expected. August's total was 948.7 billion.

Profit Alert: The Subprime Auto Loan Market Is About to Collapse - Here's How to Profit

Household loans, which are mostly used to finance property purchases, accounted for 46% of total loans. That was up from 39% in the first half of the year.

China's Debt Could Create the Next Stock Market Crash

Lewitt has been warning about China's growing debt and the chance of a stock market crash for months.

In February, Lewitt explained that much of China's $30 trillion debt was invested in unproductive assets such as "ghost cities and ghost factories that can never produce the income necessary to service or repay these obligations."

Lewitt also said China is experiencing "the biggest debt bubble in recorded history - a bubble that will pop like every other bubble in economic history. China is not immune from the laws of economics just because it claims to operate by different rules."

The amount of debt in China has increased 300% since 2007. Shadow banking and real estate are the two biggest reasons why, according to global consultancy McKinsey & Co. The firm also says China's debt as a share of GDP has outgrown both the United States and Germany.

Chinese debt started growing far faster than GDP in 2011. And the biggest problem is that the faster the debt accumulates, the harder it is for China to pay off.

The key question now is how efficiently China can manage its mountain of debt as the global economy continues to slow.

Last month, the IMF warned that the global economy is at risk of stalling without urgent action to revive trade and investment levels.

Economic growth in China is projected to have grown 6.7% in Q3. That would match the previous two GDP reports released earlier in the year. But that would also be down from China's 2015 GDP growth rate of 6.9%. And that was its weakest annual pace in 25 years.

Unfortunately, China's slowing growth comes at a time when credit expansion is happening at a record pace.

Economists caution that when you have the kind of colossal credit expansion that China has had over the last several years, history shows financial turbulence follows.

That's why fears are rising that we're heading toward a 2016 stock market crash.

China's situation looks like a ticking time bomb. Plus China's fragile bond market appears ready to implode. Many are skeptical the introduction of a new government policy to reorganize debt-to-equity conversions will work. The move is aimed at reducing China's swelling corporate debt.