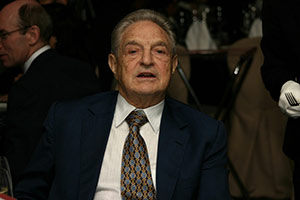 Liberal activist billionaire George Soros has deep ties to a company responsible for supplying the United States with voting machines for the 2016 presidential election...

Smartmatic Group, a UK-based electronic voting corporation, will be providing its voting machine technology to the Electoral Commissions of 307 counties in 16 states on Nov. 8 -- including five swing states.

There is an obvious conflict of interest with Soros' affiliation. The hedge fund billionaire has donated upwards of $9.2 million to Democratic super PACs and to Democratic presidential candidate Hillary Clinton during this election cycle. [Editor's Note: We've long covered Soros' attempts to influence the U.S. election -- like the time he sprinkled Dem think tanks nationwide with a whopping $27 million...]

Here's a list of states that will be using Smartmatic's machines...

George Soros Voting Machine Will Be in These 16 States

According to Smartmatic's website, they supply voting machines in the following states, five of which are swing states:

George Soros' political largesse knows no bounds. He spent on the liberal agenda this election like never before.

But he's not the only big-money influencer pulling strings behind the scenes. Far from it...

Have a look at Money Morning's "Auction for America" site, where we're keeping an up-to-the-second running total of dark money that's funneling its way into the 2016 election...