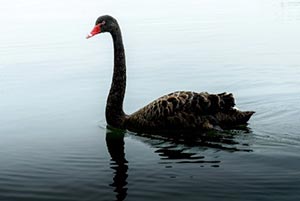 The term was coined by trader, statistician, and author Nassim Nicholas Taleb in his 2001 book, "Fooled by Randomness." In 2007, another Taleb book, "The Black Swan," further popularized the term.

One great example of such an event in stock market crash history is the 2008 financial crisis. The "black swan" in this case was the implosion of the subprime mortgage market. Banks made more than $2 trillion worth of home loans to borrowers who could not afford them.

When those borrowers began to default in large numbers in 2007, the housing bubble burst. The shock of plunging home prices on the financial system triggered the crisis that caused the 2008 stock market crash.

Take a look at this stock market crash history graphic compiled by Call Levels. It describes nine black swan events and their impact on the markets. Below I have some recommendations for investors on how to deal with black swan events.

What Investors Can Do About a Black Swan Event

Investors can't know exactly when a black swan event will trigger a stock market crash, but the possibility is always lurking out there. So investors need to integrate that possibility into their investing strategy.

That's why Money Morning Global Credit Strategist Michael E. Lewitt advises that investors keep between 10% to 20% of their total assets in some form of gold, either physical gold or a gold ETF (exchange-traded fund) like the SPDR Gold Trust (NYSE Arca: GLD). He says investors can also increase their cash positions.

Related: How to Make a Killing... When Everyone Else Is Panicking

Meanwhile, Money Morning Chief Investment Strategist Keith Fitz-Gerald cautions investors never to bail on stocks entirely, whatever the circumstances. Instead, he recommends that investors seek out quality stocks that, ideally, are undervalued, have strong balance sheets, pay a dividend, and have potential for growth.

"Selling out when stocks are falling may feel good, but doing so takes you out of the game," Fitz-Gerald explained. "Being able to purchase more income-generating shares, year after year, at cheaper prices clearly outweighs the downside of 5% losses on principle each year. Missing out on upside is always the far more expensive proposition over time."

Just last week Fitz-Gerald discovered a stock that fits these criteria perfectly. This company has almost doubled its customer base over the past 12 months and is on the verge of announcing earnings growth of 325%. That, Fitz-Gerald says, should send shares skyrocketing...