Story updated Sept. 21, 2017: So far, there are 28 states that have legalized marijuana, including the District of Columbia.

All 28 permit the sale of medical marijuana; eight have legalized or decriminalized recreational marijuana.

Take a look at the chart below… 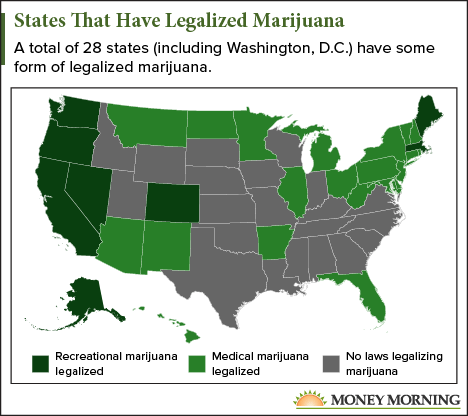 There has been a major shift in support of marijuana legalization over the past few decades. In fact, the rate of by-state legalization has been surging…

Starting with Oregon in 1973, individual states began to liberalize cannabis laws through decriminalization.

In 1996, California was the first state to legalize medical cannabis, sparking a trend that spread across most other U.S. states.

In 2012, Colorado and Washington became the first states to legalize cannabis for recreational use.

Fortunately for the marijuana industry (and investors), this trend is likely to continue…

2018 Will Be the Year for Investing in Marijuana

"[Over the past year] weed investing's only gotten bigger, better, and more profitable," according to Money Morning Director of Technology & Venture Capital Research Michael Robinson.

Michael is our renowned technology expert and one of the top financial analysts working today. What's more, Michael is also our chief marijuana industry expert – and for good reason.

And this time last year, Michael released his "weed investor's bible," The Roadmap to Marijuana Millions. At the time, it was packed with 30 of his absolute favorite – and most profitable – plays in the still-booming legal cannabis sector.

And he's now looking at four key events on the horizon that could lead to even more profits for investors:

Don't Miss Out: For marijuana industry updates in real time, sign up for Profit Alerts here.

They should legalize it period

So ready for pot to be LEGAL.

This is not correct. Texas has legalized medical marijuana for epilepsy.

How about a "freebie" for a change?

Want to know who can help me bye the penny marijuana stock. I'm new at this and no one can help.

I think all states should let it be lega,,, besides anything that is natural made by God is good for you….

Ok I live with chronic server pain daily and no type of relief in sight,,but I know that this will help me if they just do what they need to for us..

Can I trade these stocks with the app Robinhood?