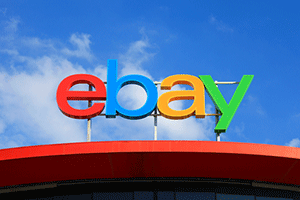 Investors have been asking us "why is eBay stock down today?" as shares of the e-commerce company are down more than 11% below $29 Thursday.

The eBay Inc. (Nasdaq: EBAY) stock price is declining today because the company reported weaker than expected Q4 guidance. That's despite the fact it posted better than expected Q3 earnings.

Here are the key details from the eBay earnings report released after Wednesday's close...

Why Is eBay Stock Down: Behind the Numbers

That last figure is the biggest reason eBay stock is tanking today. Investors aren't the only ones concerned with the eBay stock price; a number of analysts have also downgraded the stock.

While eBay has name recognition in the United States, we've been targeting a different e-commerce stock. And our pick looks like an even stronger buy after today's drop for eBay stock...

Avoid the Tanking eBay Stock, Buy This One Instead