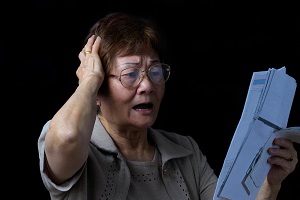 Your monthly Social Security check will increase by a measly $5 next year.

This is because the 2017 Social Security COLA (cost-of-living adjustment) increase for SSI beneficiaries will be raised just 0.3%, reported the Social Security Administration (SSA) on Tuesday (Oct. 18).

The puny COLA increase will hit right as the Federal Reserve is targeting an inflation rate of 2% by the end of the year, so that it can raise interest rates again.

If the Fed's plan succeeds, senior SSI beneficiaries will feel the impact in their wallets...

You see, when inflation rates rise, so does the cost of goods and services. This is particularly dangerous for seniors next year because it means the price of these goods and services will outpace the rise in their incomes (a 2% inflation increase is 1.7% higher than a 0.3% COLA increase).

Seniors will be less able to afford goods and services (including healthcare) because of that widening gap.

So next year's paltry 0.3% increase pales indeed. Especially since Social Security Income recipients received no COLA increase whatsoever the year before, in 2016.

Now here's a breakdown of how the paltry 2017 COLA increase is also going to impact married recipients, widowed recipients, and all retirees combined... 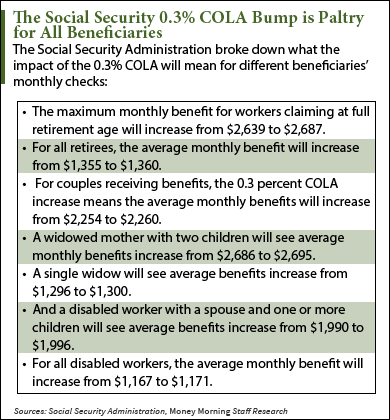 If the SSA's flat COLA increase for 2017 isn't bad enough news, then just look at how the metric is actually calculated.

Here's the "fuzzy government math" used to calculate the COLA each year...