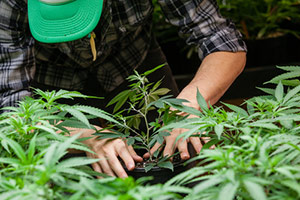 For the first time ever, there will be nine states voting on marijuana legalization referendums in a single day: Nov. 8.

And the vote could create a massive wealth grab - one of the largest in history. In fact, everyday Americans could turn into millionaires overnight.

Money Morning has developed a comprehensive guide of marijuana stocks to show our readers how to profit from this historic vote - and the coming tide of sweeping legalization. This guide contains dozens of pot companies savvy investors will be paying attention to on Election Day. And we'll be sharing exactly how you can receive this guide in just a moment...

But first, let's talk more about which states will be participating in the Nov. 8 vote - and why it's so important.

On Election Day, voters in California, Maine, Massachusetts, Nevada, and Arizona will be considering referendums about recreational marijuana use. All five of these states already allow medical marijuana use. According to recent polls, measures in California are likely to win, the New York Times reports. In Massachusetts, a poll showed that 55% of likely voters support legalization, according to the Times.

NEW: Plot your course to a weed windfall with the top pot stocks from every ecosystem -growers, edibles, dispensaries, and more.

Other states with marijuana referendums include Arkansas, North Dakota, Montana, and Florida. None of these states - except for Montana - currently allow medical or recreational marijuana use. Arkansas voters will be voting on two separate ballots, both of which would allow medical marijuana use. Although, the ballots face strict opposition from Republican Gov. Asa Hutchinson, who used to lead the federal Drug Enforcement Administration.

North Dakota and Montana's referendums are up in the air. Montana's marijuana referendum, however, would only undo the restriction a 2011 state law put on a 2004 voter initiative legalizing medical marijuana in the state. There's a good chance that voters would approve it, since they've already voted in favor of medical marijuana legalization before.

The Nov. 8 vote is only a portion of the gold in this massive treasure trove of opportunity, though. What this vote signifies - that's your profit play. A recent Gallup poll showed 60% of Americans support legalizing marijuana. That's up about 30% from 2000.

It's only a matter of time before this mounting pressure of support for marijuana legalization overwhelms Washington - and marijuana is unlisted as a "dangerous" Schedule I drug.

Smart investors are already preparing for this inevitability. They'll be looking for one of the best marijuana stocks to buy before the industry soars to a potential $22 billion in value by 2020.

We have a complete guide to some of the hottest marijuana stocks on the market right now.

Our 90-page cannabis investing research guide can be yours for free, right now. But this offer is only available to the first 500 people who respond today. Reserve your copy now...

Make money out of weed, not out of cages!