Apple earned $1.67 a share in its fiscal Q4, one penny higher than the consensus analyst forecast. Revenue was $$46.9 billion, just short of the forecast for sales of $46.94 billion. However, the Q4 Apple earnings were down 14.8% from the same period a year ago. Revenue was off 8.93% year over year.

Despite conflicting predictions, the iPhone 7 did well enough to push total iPhone sales above expectations. Sales of the iPhone brought in $28.16 billion, edging the forecast for sales of $27.78 billion.

That bodes well for the current quarter, when Apple traditionally sells the most iPhones.

Other good news in the AAPL earnings was guidance for the current quarter. Apple forecast revenue of $76 billion to $78 billion, well above the $74.9 billion analysts had been expecting.

On the negative side, Mac and iPad sales both continued to slide. Both segments came in below expectations.

The 2016 Q4 AAPL earnings report will go a long way to clearing up just how well the new iPhone 7 is selling - an answer that will determine the fate of Apple stock for months to come.

Here's the breakdown by product segment, according to FactSet: 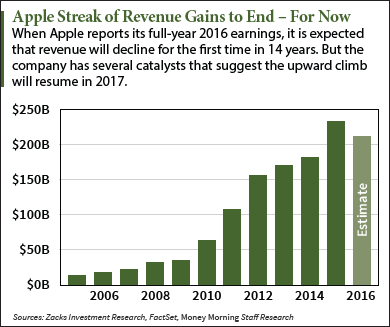 Unless Apple has a major beat, it will be the third straight quarter of earnings declines. For the full year, Apple earnings will decline for the first time in 14 years.

The iPhone 7 was only sold in the last two weeks of the quarter. But how well it did compared to earlier versions will foreshadow sales in the current quarter - Apple's biggest - as well as for the next several quarters. The less-than-stellar sales of the iPhone 6s is the main reason for the current earnings slump.

Investors focus on iPhone sales because they makes up more than 60% of the company's revenue. A stumble there wreaks havoc not only on AAPL earnings, but also on the Apple stock price. It's happened twice in the past five years, in 2012-2013 with the iPhone 5, and again last year with the iPhone 6s.

Because Apple declined to release the first-weekend sales figures of the iPhone 7 as it has done with previous versions, we have less data than usual. And estimates of iPhone 7 sales have been mixed.

UBS has reported that initial sales of the iPhone 7 in China - a key growth market for Apple -- are "weaker than the 6s" when it launched last year. UBS analyst Steven Milunovich said domestic rivals were taking market share.

On the other hand, a survey by Consumer Intelligence Research Partners (CIRP) suggested that the iPhone 7 made up 43% of all iPhone sales in the September quarter in the two weeks it was available.

Reports on the health of iPhone component suppliers, seen as a proxy for iPhone sales, have been contradictory. A Sept. 28 report in DigiTimes said that Apple orders for iPhone 7 parts were 20%-30% higher than expected.

But more recently Nikkei reported that seven of nine Apple suppliers on its watch list had uncharacteristic sales declines in September.

And then there's the difficult-to-quantify impact of Samsung Electronics' (OTCMKTS: SSNLF) exploding Galaxy Note 7 phones. The misstep by Apple's prime rival could push some customers to the iPhone 7, but they just as easily could opt for an Android alternative, particularly Alphabet Inc.'s (Nasdaq: GOOG, GOOGL) new Google Pixel phone.

Here at Money Morning, we're optimistic the iPhone 7 will do better than most think.

For its part, Wall Street appears to hold an optimistic view of the iPhone 7. Apple stock is up 19% over the past three months. AAPL has been trading around $117, a level not seen since last December.

And unless the 2016 Q4 Apple earnings reveal an unforeseen disaster, Apple stock is a buy regardless of whether the company beats the Street or not.

Don't Be Distracted by the Q4 Apple Earnings