Gold managed its first weekly gain in five weeks last Friday, and it has remained mostly flat so far this week.

And one of the biggest questions on the minds of investors has been "are gold prices going to rise from here?" 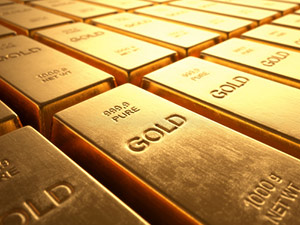 The story for gold this month has been all about the dollar. It's been strong and keeps heading higher, continuing a trend that began in early October.

The rallying U.S. dollar has provided a challenging environment for gold prices in October. And despite the run we've seen already in the dollar index, I'm not sure that it's quite over yet.

Counterbalancing that has been ongoing interest by investors in owning gold ETFs and other similar investments.

That has many wondering if the correction/consolidation is finally behind us.

Let's take a look at how gold prices are trending, and if gold prices will climb from here…

How Gold Prices Are Trending Now

Gold started off this week on an upswing, but quickly fell flat thanks to the climbing dollar. The U.S. Dollar Index is up an impressive 3.5% in just the last three weeks.

You've heard me often mention the U.S. Dollar Index (DXY), and that's because there are so many eyeballs on it. It also typically explains a lot of the short-term movement in gold prices.

Have a look at this six-week chart for some perspective on the dollar's recent strength. 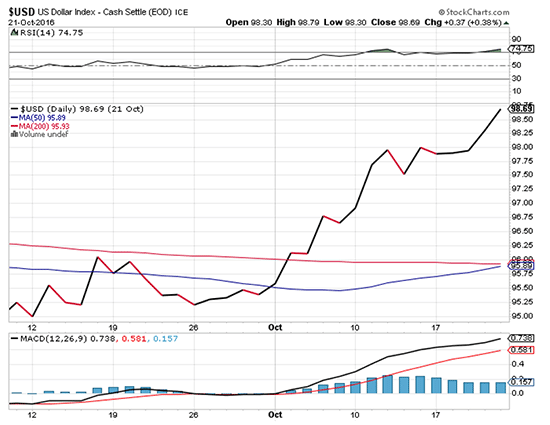 The DXY stalled early last week, hovering just below the 98 level. Then on Thursday morning, the DXY kicked into high gear, regaining the 98 level and soaring to 98.79 on Friday.

I think the DXY's strength is a combination of election uncertainty and rate hike anticipation.  Not only is momentum clearly in its favor, but we're close to getting a golden cross confirmation, as the 50-day moving average looks likely to soon close above the 200-day moving average.

Meanwhile, the Fed's been telegraphing that a rate hike's coming.

We already know it's unlikely for the November FOMC meeting. But a rate hike at the December meeting looks likely, with the probability of a hike now reaching 75%.

Now that we've looked at how gold prices are trending this week, here's where I see the price of gold headed from here…

Are Gold Prices Going to Rise?